Hilton Head Island: the early Webb catches the bird; a Webb: hell in paradise; a poem 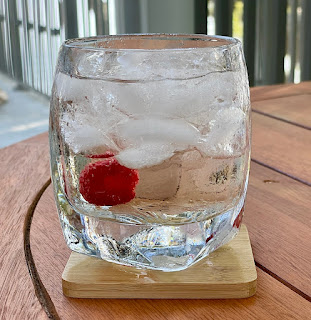 I was an early Webb this morning.

I woke at 6 am.  Dug shorts and t-shirt from the dirty clothes bag because I knew they were going to get sweaty.  Had a drink of water and biked down to GANNET to stow properly the Evo outboard, which I had left on the Great Cabin sole and rearrange the interior.  This was at first light, but before dawn.  On the dock I disturbed egrets and night herons seeking their breakfasts.  I apologized and noted that they quickly regrouped behind me.

On board I did my work, confirmed that the failed battery charger is still failing, sweated profusely though the air temperature was only 79F/26C, and biked back to the desirably air-conditioned condo before 7.

I did not plan to go outside again today, but 8:30 pm finds me writing this on the screened porch, sipping vodka, seeing post-sunset color fade from the sky and its reflection fade from Skull Creek.  Skull Creek is pewter.  A narrow dark band of land and trees.  The sky a slightly darker gray than the creek.  Occasionally voices from condos next to ours.  The hum of a motor somewhere.  But tranquil.

In line with being of service to my fellows being my highest goal—well, perhaps I have given in to a moment or two of self-indulgence—I have invented a drink which I modestly call a Webb.  Actually it is a simplification—I am immodestly good at simplyfying—of a drink Peggy, my sister-in-law makes, called I think a Winter White Cosmo.  Not having on hand all the ingredients for that, I came up with The Webb.

I generally have two ounces of each.

Pour both into a glass full of ice.

Add a raspberry for accent.  I suppose a strawberry would do.

Your biggest problem will be finding white cranberry juice.  Try Amazon if your local supermarket does not have any.

For eight or nine months Hilton Head Island is a valid version of paradise.  In the northern summer it is not.  I don’t know that Hilton Head is hotter than Hell during what is the prime tourist season on the island—more unneeded proof that we are not an intelligent species—but it is too damn hot.

Carol found research that our body sensors to overheating become less sensitive with age.  That is my experience.  I spent many years in the tropics, often doing my workouts on deck in the heat of late afternoon followed by a shower ashore or a solar shower in the cockpit;  Yet three times in the past year or so I have been seriously overheated here with far less exertion.  So summers here for me are limiting.

No wonder to me New Zealand’s Bay of Islands, which never knows such numbers, and is much less susceptible to hurricanes/cyclones is my true unobtainable paradise.

I will need supplies next week.  I am out of Laphroaig.  I am almost out of vermouth.  I will run out of fresh berries for my morning uncooked oatmeal.  Neighbors have offered me rides, but I don’t like to accept help, so I may have to Uber.

As you may know I read some poetry each day and I listen to some Bach.

The poetry now comes from THE OXFORD BOOK OF ENGLISH VERSE and an anthology of native American titled WHEN THE LIGHT OF THE WORLD WAS SUBDUED OUR SONGS CAME THROUGH.

I must confess to being mostly disappointed with the native American poems, in which the most common theme is self-pity.  However justified by history, self-pity is not attractive or useful to the person who feels it.

However here is a poem from the anthology I read today and like.  It was written by Ed Edmo.

As I sip the last small double walled glass of vodka, I am listening to Linda Ronstadt singing ‘King of Bohemia’.

Going to try a "Webb" cocktail! Thank you for sharing. And Linda Ronstadt is an underappreciated artist with sublime talent, in my view. Finally, my sympathies on the heat. I can relate as it's 97 in Atlanta today. But Braves have won 11 straight, so Atlanta isn't all bad.