San Diego: from the Great Cabin 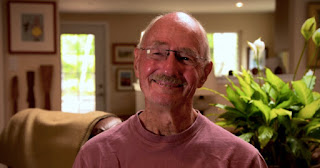 I slept ashore last night at the home of Susan and Howard, friends since the early 1970s, between clean, dry sheets on a bed that didn’t move.  Pure decadence.
I returned to GANNET today and with the help of some sunshine, got her interior dry and organized and transitioned from passage to harbor mode.  I will sleep tonight on the v-berth for the first time since leaving Hilton Head.
I have not lived full time in San Diego for decades, but I have history here that goes back to the 1950s and it feels like home.  I wish it were.
I emptied the two jerry cans that still had water in them.
Despite a brutally slow passage, I reached San
Diego with about seven gallons of water, three small boxes of juice, and two cans of beer.

The daily runs from Balboa, Panama to San Diego total 3309 miles.
As I have noted, tacking we sailed farther than the straight line distance between noon positions.
The total of daily runs for the circumnavigation is 29989 miles.  I think it fair to round up to 30,000 miles.

The photo above is a capture from a video interview made yesterday.
The photo below was taken by Lee a few minutes after I reached the CPB dock here at Shelter Island. 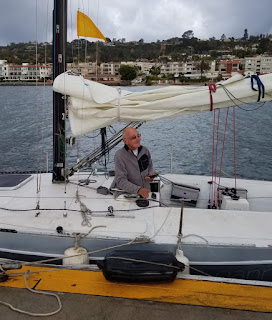 Lee arranged for me to have a guest dock at Silvergate Yacht Club for a few days, where I have been treated with great and friendly hospitality.  I thank him and the club.
I will be moving GANNET to a marina later this week.
I am losing ground on emails, but promise I will catch up.
I will also review and post the passage log within the next few days.

I am sipping Laphroaig, naturally from a crystal glass.  I hesitated for a moment before setting it down on the counter top beside me before realizing that GANNET is at a dock, not at sea and won’t suddenly heel over.
Posted by Webb at 11:35 PM

Not able to reach San Diego before dark, I hove to last evening at about 7 PM eight miles SSW of Point Loma which marks the entrance to San Diego Bay.
I went to sleep early, woke at 10 PM to find we had hardly moved.  Woke at midnight to find us being blown west at two knots.
I got up, got into my foul weather gear, and started sailing back east.
I set an alarm for 3 AM and dozed some at Central, but woke before the alarm went off.  I trimmed and retrimmed the sails to put us just off Point Loma at first light at 4:30 and we were.
There was a quiet sense of satisfaction as we rounded Point Loma and entered the bay.
In smoother water I fit the Torqeedo, which started as it should, dock lines, and fenders.
I thought it odd that several sailboats passed us heading out, motorsailing with main up, until I reached the Customs dock and found it almost full of boats returning from the Ensenada Race.
I also found on the dock a small unexpected welcoming party of friends who had seen our Yellowbrick position.
It was a hard passage.  Hard without any severe weather.  Hard with windless wastes beyond my experience or imaginagtion.  Hard with the last 1500 miles hard on the wind.
I will write more in time.
I have numerous emails to respond to.  I thank you all now generally for your congratulations and will individually when I can.
This is a significant day in my life:  the end of the second part and the beginning of the third.
November 11, 1941.   November 2, 1974.  April 29, 2019.
Posted by Webb at 8:20 PM