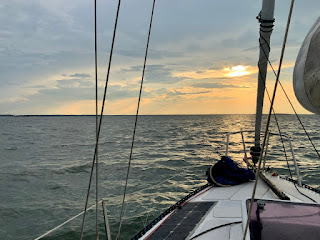 I am anchored again in Port Royal Sound a mile north of where I was last night.

In the photo you are looking toward the mouth of Skull Creek two miles distant.

I woke at 6, drank orange juice, made a cup of coffee, read news online, and raised the anchor at 7.  The anchor came up clean as it usually does in the Sound.  The wind was 8 knots on the beam and we had the tide with us.  Under jib alone we sailed at 5 and 6 knots.  Sometimes tide assisted 7.  Dolphins swam with us for a while.  Another sailboat came out behind us under power and turned north.

We had anchored five sailing miles from the slip which had taken us five hours to sail.  From that point we still had nine miles to open water free of shoals.  We made that in less than two hours.  Still it is a long way from GANNET’s slip to being free of constraints.

I did not bring the Evo battery in last night to charge.

I checked and the Evo was hydrocharging, but slowly.  Only one or two percent per hour and I was sailing at an average speed of close to six knots.  At 9 am the battery was at 58%.  At 12:30 pm it was 64%.  At that rate one would have to sail for more than twenty-four hours to half recharge the battery.

Unexpectedly I found a half dozen ships anchored ahead of us.  Being free of shoals meant only that we were in 50’ of water.

I did not think I could hydrocharge enough and I did not want to fight the outgoing tide with light north wind Friday morning, so I turned around and headed back in.  I turned about halfway between the the Yellowbrick 1200 and 1500 UTC positions.

We had good sailing on the way back although the wind gradually headed us and we ended up closehauled, heeled over too far.  I leaned back and saw that the Evo propeller was not fully in the water which reduced charging and so partially furled the jib.

My Apple watch showed a notification of a marine weather warning.  Severe thunderstorms again due in the afternoon.

As we moved up the sound, I furled the jib completely.  We were still making 5 and 6 tide assisted knots under main on port tack in 16 to 18 knots of wind.  That is until I tacked and we went instantly from 6 knots to less than 1.  I still do not understand this, but we were stalled close enough to where I wanted to be, so I decided to anchor.  Yesterday I was pleased by how quickly and smoothly I anchored.  Today I was not and the anchor and rode were fully accessible where I had left them under the forward hatch, but somehow the 20’ of chain came on deck with a knot in it which I did not see until I had already lowered the anchor off the bow.  We were in 35’ of water so the anchor was not on the bottom.  Eventually I cleared the knot in the chain and got the anchor down in choppy water with the tide holding our stern into the wind.

Anvil headed clouds formed over the land and merged.  I brought the Evo’s battery into the cabin   to charge before they hit.

We did not have any of those.  I saw only 30 knots of winds briefly and only light wind fell on GANNET.  A graphic I saw on the Weather Channel site showed many lightning strikes on Hilton Head Island, including some close to our condo.  Carol advises me that our Nest thermostat and Schlage door lock are still online, so I conclude the condo is still there.

I expect another bouncy night.

The Evo battery is sitting beside me with a light indicating that it is being charged.  Unlike the Torqeedo the tiller arm does not connect directly to the battery so I can’t read the charge level.

I reread the owner’s manual this afternoon and find that charging is supposed to begin when a speed of 6 kilometers per hour is achieved for 4 seconds.  That is 3.24 knots.

I also read that the battery if left unattended will discharge to 60% which is stated to be optimum for long term storage.

One detail on the Evo that is very superior is the electrical connections which are metal rather than plastic as on the Torqeedo and require only a few turns.  On the Torqeedo both the tiller arm and the battery connections require many turns and are susceptible to cross threading.  I hope the morning finds the Evo battery at 100% when I attach it to the shaft.

North wind is predicated for tomorrow morning which is fine for sailing down Skull Creek.  Low water will be around noon, but I will probably head in sooner.

Greetings from Perth, Webb.
If I were to guess about your mysterious drop in speed on tacking (and I am going to guess) I'd say it's a combination of current direction and wind direction that works well on one tack but not the other. If I'm right (and I'm not saying I am) then the effect would only be seen when comparing speed over ground on each tack, not when comparing speed through the water.
Also, I may have a clue about why your tiller pilots keep failing. I was looking into using an electric actuator (like the ones on the tiller pilots) on a current project and I found that they all seem to be rated at about a 20% to 25% duty cycle, and it may well be that the motors are just burning up because you seem to only use them when you have no alternative - When they would be working the hardest. Most people are probably using them on calm days on the ICW, when they won't be constantly moving one way or the other. Let me know if you're interested in hearing more (I've been an engineer long enough to know that too much detail about these sorts of things bores most people.) ;)
Cheers,
Ken

I agree Ken about the wind and current being better on one tack than the other. I just don’t recall ever experiencing so dramatic a difference as I did yesterday.

Of tiller pilots, I was thinking these past few days that now that I am using them only for a few hours from time to time, I am not having failures.

During GANNET’s circumnavigation I sailed more most weeks than I now do in a year. I am pondering that.