Hilton Head Island: an apology to the twenty; the damned; and the thing itself 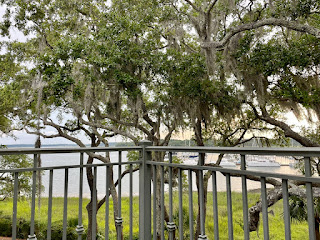 Just after 7 pm.  I am sitting on the deck.  I like being on the screened porch, but I like being out here exposed to the air and sky more.  Above is what I am looking out upon.  Not spectacular, but beautiful.  Live oaks.  Spanish moss.  Skull Creek.  An overcast sky.  The marina.  And serene and quiet.  Far better than being in any city, although those who own condos costing tens of millions of dollars overlooking Central Park would not agree. I have lived a different life. When I came out here I intended to play music, but realized for now I prefer quiet.

I am not always certain what I have shared here, so had to check to see if I had said that Carol has left.  I see that I did.  She will be back in four weeks and then on July 11 I will fly with her to Illinois and be there until around Labor Day.

A low that the media hysterically cry may become a named storm is moving over south Florida.  It will pass south of us, but leave a hole in the wind behind that the latest GRIB shows should fill in on Wednesday.  I have no desire to go out and drift, so will wait until then to go sailing.  Maybe even longer.

I owe an apology to the twenty or so who read the post I later deleted last week.  It was open to misinterpretation.  I am completely at fault.

I have heard from several of the twenty who were disturbed that it seemed a suicide note.  It was not.

I am not opposed to suicide.  Were I a certain kind of scientist I would investigate whether there is a suicide gene.

If I were to get a diagnosis of some cancers I would at my age not be willing to undergo severe treatment to linger a few months longer, but would if I could crawl down to GANNET and go out to sea.  I do not look Japanese, but I share their values about suicide which are of course un-Christian.

As a side note suicide is I believe an unforgivable sin to the Catholic church, yet my grandmother was given consolation after my father’s suicide by a Catholic priest who was perhaps a better man than a church official.

But that was not at all what I intended in that post.  I pride myself as a writer, but here, not wanting to make a suggestion of something I may never do, I failed.

Of what I might do, most of you would be pleased.  Carol will not, but then she won’t read this.  But I am still trying to reach forward.  We will see what time and chance permit.  I have outlived any imagined Ulysses and would happily die one night in my sleep.  I don’t think it will be that easy.  It must have hurt getting in here, though we do not remember, and it will likely hurt getting out.

I was looking for something to watch last evening and found trending on Netflix a 1960s semi-western, THE PROFESSIONALS, with an all star cast of Ralph Bellamy, Lee Marvin, Woody Strode, Burt Lancaster. Robert Ryan, Jack Palance. and one of Italy’s more voluptuous exports, Claudia Cardinale.

I am not going to give the plot.  This is not a great movie, but of what it wants to be it is good and to me entertaining.

In one scene Burt Lancaster says, “Well, I’ll be damned.”  And Lee Marvin relies, “Most of us are.”  Indeed.

I have been watching some of the French Open tennis.  Rafa Nadal and Novak Djokovic both have net worths of more than $200 million.  The money no longer means anything.  Yet they both want to win so much.  Ego?  The desire to make their mark on history?  To be the best ever?

I wrote a piece about Joshua Slocum returning to the love of the thing itself.

I am not sure that Rafa and the Joker are returning to the love of the thing itself, but maybe they are: seeking the pure maximum fulfillment of their abilities.

I understand that.  So am I.  Money is not the measure of all things.

Today I went to the 100 level on my workout for the first time in a long while.

I was one of the 20 who read your post. I’m not going to judge if it hinted at suicide. I’ve been following you for so many years that I can’t even remember when I began. My opinion lately hasn’t been favorable towards you. I’ve been sensing a pomposity about your future placement in your accomplishments which are undeniably remarkable but with your false sense of humility is off putting. You are old and declining in health as are many of your followers. It’s time to go gently into that good night and depart with your well deserving accomplishments to speak for you…. Enough bullshit!!

That you are one of the few who have been following me for a long time gives me pause, as does pomposity. I never expected to be accused of that and will consider if I should have. If so, I am ashamed.

I have always lived with uncertainty.

I do not know that my life—all the joy, all the pain—has meant a damn thing. I wish I did.

But as I just wrote in a journal post a few hours ago, I am still tying. And that is not bullshit.


I am fortunate to have met you twice. Both encounters, in Durban, reinforced what i have learned from your writing; that you are unique in that you do not follow the herd, dont think like the majority and have the ability to make decicive descions in the most unfussy way. Where others research the past to see how others have made voyages you decide on your route and plan your own way forward with no debilitating fear of the unknown.

As to meaning, your life - fortnately well journaled, is an example to those of us, who confine ourselves to the middle of the moving herd, that thinking differently is the way forward for the human race. We are not all born to be useful originals, you show us how this can be achieved.

Glad to know you are still ‘tying’, and that’s not BS!

I was wondering a few days ago about how you are doing since your move, but only have your old work email. You have mine. I’d be glad to hear from you.

Webb - I shall not judge the thoughts, feelings and musings of a humble and modest 80 year old man who has circled the globe six times on small sailboats and when he departs will leave barely a trace of carbon from his time on this planet. Thank you for sharing your life with us through your books, articles and blogs. You have enriched my life and given me a new perspective. The question for many of is, "When it comes times to depart this life would you rather be at sea continuing on the journey or in a hospital bed hooked up to wires and tubes and a ventilator?" I hope I will have the opportunity to choose the former over the latter. As you can still do your age in push ups, I suspect your readers will continue to enjoy and benefit from your writing for many more years.
Scott
S/V Free Spirit
1975 Ranger 23
Los Angeles

I believe I stumbled upon your evanescent post, but went away merely confusedly bemused. (Bemusedly confused?) Serious lack of imagination on my part, apparently.