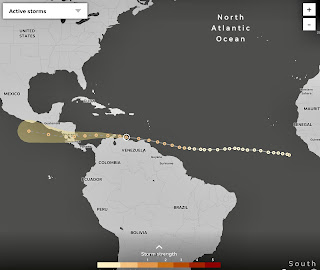 As I am writing Wednesday afternoon, Rik, who is a sailor I have not met but consider a friend, is  experiencing what is still being called ‘Two’ by the National Hurricane Center.  Rik lives on Aruba, which has long been thought to be south of the hurricane zone.  No longer.  So was Trinidad and that is where the storm made landfall.

It has been said that you may not believe in climate change, but your insurance company does.  It used to be that you had to move your boat south of a given latitude for your insurance to be in effect during the hurricane season.  I have never had boat insurance except when in marinas that require it.  But I know that Trinidad was far enough south for the insurance companies and so a common place for sailors to store their boats.

Putin’s war which is going to result in among other disasters increased use of coal and a possible Supreme Court decision in the near future which may limit the EPA’s ability to restrict green house gases are going to make climate change worse.  Hopefully the AI robots will take over in time to save the planet.  Homo Sapiens is failing to do so.

I had the pleasure of talking to Ron Moore for a half hour on the telephone yesterday. He has closed his former business, which was my only email address for him, and I am indebted to Kent, maintainer of Audrey’s Armada, for tracking Ron down for me and putting us in touch.

From Ron I learned that indeed the track holding the pipe berth side bolt rope is attached to the hull by pop rivets.  However Ron advised that after drilling out the current rivets and filling the holes with epoxy, to attach the new track, which I received a couple of days ago from SailRite—an excellent company—with ⅜” screws.  The hull is balsa cored and the screws would only go through the inner layer of fiberglass and perhaps slightly into the balsa core.

I also asked Ron if the rudder shaft is held by bushings or bearings.  It is by bushings as I believed.

Unexpected news is that possibly three new Moore 24s are going to be built.  They will have cockpits with cutout transoms as several Moores have been modified to have and composite interiors.  I would very much like one, but not enough for the price difference between one and GANNET, though I probably have almost as much money in GANNET as a new boat would cost.

Last evening I finished Peaky Blinders.  A couple of weeks ago I said that if the series continued as it began, it might be the equal of The Sopranos and Breaking Bad.  It didn’t and it isn’t.

I watched 34 of the 36 episodes.  Six a season for six seasons.  I skipped episodes 4 and 5 in season six because I had had enough.  I read detailed synopses of them before watching the finale.

The acting, direction, and filming were all excellent.  They were let down by the writing.  Plots were convoluted and contrived and inconsistent.  Enemies appeared and abruptly vanished. Characters often acted out of character.  And there was gypsy witchcraft.  Plus a great deal of exceeding brutality, which might be consistent with the lives these people led, but was sometimes hard to watch.

I read that there may be a Peaky Blinders film.  If so I will probably see it.  Some of the characters were unusual and interesting.  If there is a film, I hope it has better writers.

is it possible to first ex ploy a 1/2 inch strip of wood to the hull, and screwing into it. and not the hull?

I have considered that, but there would times when there would be great stress on the bond, and I trust Ron Moore’s advice.