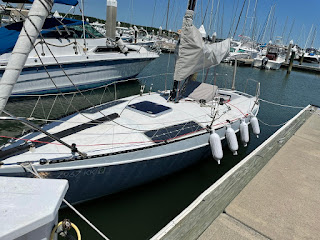 I woke at 6 this morning, had a half glass of grapefruit juice, a cup of coffee, read some news online, shaved, and was on my bike heading for a supermarket at 7:20. Of the two supermarkets I frequent, one opens at 6, the other at 7.  Not needing to go to a liquor store, which do not open until 9, I wanted to avoid the heat and get it over with.

Only a few people on the bike paths on my way to the supermarket.  More when I returned.  Most walking dogs.  Three or four joggers and about that many other cyclists. We all exchanged ‘Good mornings’ and it was.

I needed berries, fruit, milk, ice cream, a few frozen meals.  I also bought a good bottle of cabernet sauvignon because I deserve it.

I am now probably set until Carol arrives with a rental car a week from Thursday, but will likely make another early morning ride to a supermarket before then.

I bought GANNET new fenders from that well known chandlery, Amazon.  The old ones were at least ten years old and dirty beyond cleaning.

A friend saw the above photo and wrote that GANNET looks good, but up close she is starting to fail the view from one boat length away test.  Her topsides need painting.  I last did them ten years and tens of thousands of miles ago.

As I have noted before boat work is difficult to arrange in Hilton Head.  I have minor jobs for a rigger and for a sailmaker, the topsides to be painted, which I may even pay someone else to do, and I need a skilled boat worker to fix the port pipe berth.  The tube holding the bolt rope is pulling away from the hull and also letting part of the bolt rope slip out of the groove.  I don’t even understand how it is attached to the hull.

In San Diego I could get all of these done with a few phone calls and moving the boat an hour or two.  Here each is far more complicated.

When the college world series game last evening between Mississippi and Arkansas quickly became a blow out, I retired to the bedroom to continue to read Mikhail Bulgakov’s great novel, THE MASTER AND MARGARITA, which has some supernatural elements in it.  After a while the bedroom began to glow supernaturally.  What is going on, I wondered?  I glanced up and the post sunset sky was on fire.  Spectacular for ten minutes or so.

The previous post has elicited more comments than any other I can recall, except perhaps some  upon completion of GANNET’s circumnavigation, and I’m not even sure about that.

While I am probably about averagely profane, I don’t believe I have ever before used the f-word in print.  I don’t expect to do so again.

The plan on my Moore 24 to fix this is to drill,out all of the pop rivets. Then, the holes will be sealed with fiberglass that has been thickened with filler material. After that is cured, the aluminum extrusion will be checked to see how much corrosion. If the extrusion gets reused, new holes will be drilled for a new set of pop rivers and not use the existing holes.

Thanks for the information. I assumed there are pop rivets but with the pipe berth in place can’t see them.

Webb,
It sounds like you have a very small window to get substances this time of year. Have you tried any of the grocery delivery sites like Instacart or the services of the local stores such as Kroger, Whole foods, etc.? I am sure you can probably get your favorite beverages delivered as well. It's pretty common around here and I don't think that costly. BTW I still go to the store myself but I have cars and air conditioning. Glad your "chauffer" is arriving soon.
Stay Cool,
Richard
Moore24 #21

Thanks, Richard, for the suggestions. My returning with Carol to Illinois for much of the rest of the summer should solve the problem for this year. With passage food/hurricane preparation supplies, I have a lot of food here and have to go out only about once a week to get fresh items, such as fruit and berries and milk and a few treats such as ice cream, and I can pick the day and time to do that. Of beverages, in South Carolina wine can be delivered, but not I think spirits.

The heat here and my body’s reaction to it is different than when I was younger and often active in the Tropics. Carol read that as we age the sensors that react to our overheating become like many other of our parts less sensitive. With me it is liking crossing a threshold. One moment I’m hot but fine, and then suddenly I am near collapse. This has not happened this year because I have been more careful. But it did three times last year.

I do have neighbors who have offered to take them with me to supermarkets and I can always Uber.

I too am glad my chauffeur is arriving.

Hello Webb,
One way to avoid writing "F*** off" again is to borrow a colloquialism from your new part-time home. As a former North Carolinian I can advise you that it is perfectly acceptable in the South to use "Well bless your heart" as a replacement for "F*** off" in almost every circumstance that involves polite company. The substitution will be understood to by all Southerners and most others.
And for those occasions where "Bless your heart" isn't good enough you can use "Bless your little heart". With practice you'll be able to get more specific and say something like "Well bless your little armchair warrior, internet expert, never saw a sundown at sea heart".