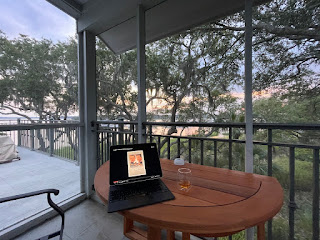 Just after 8 pm and I have made it on the porch with a glass of Laphroaig, listening to music.  At the moment to Vangelis’s soundtrack to the movie, THE BOUNTY.  It brings sailing the South Pacific back to me.  I have sailed to Tahiti six times.  I have sailed over or very close to where the mutiny took place.  I have made a far longer open boat voyage than did Captain Bligh.  His was a bigger boat, but he had many other men with him.  He lost none of them at sea.  He was a great sailor.  I would much rather have been alone in CHIDIOCK TICHBORNE.

According to Savannah television news, which I watch mostly for the weather, today was the hottest day in Savannah for three years and tied an all time high for the date.  102F/39C.  While it was slightly cooler here near the coast, the heat index this afternoon on Hilton Head reached 109F/43C.  When you equal record highs in the Low Country you are experiencing real heat.  It stretches the imagination that black slaves labored in the fields in such conditions.  Of course they had no choice and they died young.

Now, whatever else I am, I am a very physical animal.  My ancient body still ‘wants’ to be used, and I can’t do it outside these days.  So I went to the 100 level on my workout inside this afternoon.  It was not enough, but the best I could do.

I watched the college world series elimination game between Mississippi and Arkansas after my workout.  Behind a rare complete game shut out by the Mississippi pitcher, Mississippi won.

I followed by drinking the second half of the superior bottle of cabernet sauvignon and eating microwaved chicken fajitas.  Not a good match.  I drank the wine before and after.

Finally I have made my way to the porch.  The view is as above.  Not spectacular.  But beautiful in the light of the sky and reflections on water.

I poured myself a glass of Laphroaig and came out here to be partially outside and listen to music.

I first watched and listened to Joan Armatrading’s ‘Already There’ in which I admire both the song and the sensual beauty and grace of the young woman dancer.

Then Freddie White’s ‘The Parting Glass’.

While I admire the smooth skin, beauty and grace of the young, I understandably admire and identify more with the scarred aged.

And then the version of ‘Carrighfergus’ on Loreena McKennitt’s ELEMENTAL album.

I sang along with it as I often do.  Sometime I might even make a video of that, though it should be done under sail.

And finally I have come to THE BOUNTY soundtrack.

I look up from the screen of my iPad Pro and the sky and light have changed.  Lavender. Orange.  Green changing to black.  Silver.  Even when too damn hot, the real world is better than this screen.

I am going to refill my glass, like the pompous inebriated old man I am thought by at least one— and probably more—to be, and listen to more of THE BOUNTY soundtrack.

Which if you do not know means ‘To life.’

As a great writer observed, ‘Our lives are as short as a butterfly’s cough.’  Make everything you can of the cough you have been given.

Through the years I have cut out and saved journal entries and magazine articles that I have found useful, and/or particularly enjoyed. One was titled "No where in Particular" dated 2007. I read in a journal entry recently that you have some inclination for your next voyage. I like to think about where you may choose to visit, and it's enjoyable to try and imagine what challenge you will choose to undertake. In one titled, "No where in particular" dated 2007 you said, "...Fifteen years ago. At age sixty-five it seemed unlikely that I would be sailing in again fifteen years from now. But then again I might. Cosmos mariners. Destination unknown." Of course you were talking of your beloved New Zealand, Whangamumu in this entry. Could it be? Waiting... Wishing you and yours always the best,