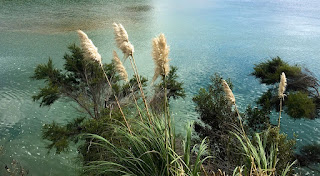 I walked into Pahia yesterday, which was a fine day sandwiched between two fronts.  Overcast and drizzle again today.
I had previously only climbed the Opua hill once since my return and wasn’t sure that I would be able to climb all three of the hills on the way to Pahia without stopping.  The tide was too high for me to go my favored way along the water’s edge around the third hill.  I did manage successfully to huff and puff my way without taking a break.
At the top of the Opua hill, the road to Pahia was blocked off and a road worker was turning cars away.  I continued on and only a few cars passed me, perhaps local residents.  Most of the time I walked in lovely silence broken only by sounds of insects and my own footsteps.
On the last hill before Pahia I discovered the reason for the closure.  A power pole had come down dropping wires across the road.  A crew were working on repairs.
At the bottom of the hill was another barricade preventing cars from going north and it dawned on me that I was stuck.  The Marina Cafe and an ATM in the marina laundry room have reduced the need to go into Pahia, but I intended to buy more at the grocery and liquor stores than I could carry far and to taxi back, which wasn’t going to happen until the road reopened.
After a leisurely lunch at the Flight Deck, a second floor cafe overlooking the bay, I shopped and carried my bags along to the road block.  I asked the worker there when the road would reopen and he said he didn’t know.
I settled into the lobby of a nearby hotel and read on my iPhone number 17 of the Aubrey/Maturin novels, THE COMMODORE, getting up every chapter to check if the road was open.  I was beginning to think that I was going to have to take a room and spend the night, when finally the barricade came down.  I called a taxi and got back to GANNET just in time to watch the sunset behind Opua.
I brought my Apple Watch with me, though I don’t wear it all the time.
I did on the walk to Pahia.  The distance from Opua to the center of Pahia measured 3.8 miles/6.1 kilometers.  The climb up Opua Hill is .6 of a mile/1 kilometer.  The other two hills are equally steep, but only half the distance, .3mile/.5 kilometer each.
I took the above photo along the way.  I believe they are known as Toe Toe feathers, pronounced toey-toey.  If you are a New Zealander and I’m wrong, please correct me.
Mark has written that the pronunciation is closer to toy-toy.  I thank him.

A few boats have cleared in during the past week.  A catamaran is on the ‘Q’ dock now.  At this time of year I assume they have come from Australia.
One was a big trawler type yacht.  70’ or 80’ long.
As soon as it cleared, it moved to the fuel dock where it stayed a long, long time.  Hours.
I would not be surprised if the fuel bill was greater than the amount I paid for GANNET.

From Chris in South Africa comes a link to a blog by a couple who cruised the Magellan Strait which gives added reason, were any needed, why I don’t want to.  I thank him.
You will know that I don’t consider them Cape Horners.

From Jeff comes a link about Inky, an escaped octopus.  I thank him.
Inky might be the perfect crew.  I’ll take him if he wants to go to Australia.  There are often times I wish I had an extra arm and he has eight.  I don’t know how much octopuses sleep, but he could hand arm steer forever.
Posted by Webb at 11:36 PM