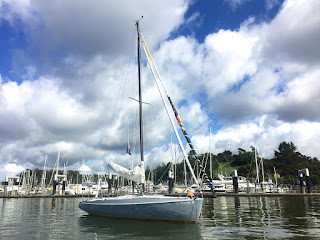 I have been here a month and accomplished all I planned to.  Little remains except provisioning and reconfiguring the interior from harbor to passage mode, and visiting Roberton Island and climbing
up to the lookout for a last time.  I still do not expect to leave until near the end of the month.
After dense early morning fog burned off this morning had the right conditions to sort out the ProFurl Spinex top-down furler.  At least I hoped so.  Flat calm with just enough wind on the beam to keep the asymmetrical from collapsing before it could be furled.  However, a sudden gust might have resulted in a fiasco.
That didn’t happen.
Sail and furler went up, sail flying.  GANNET did not take off like a startled deer.  I moved across the cockpit from spinnaker halyard to furling line—all of one step on GANNET.  Sail furled smoothly and completely, top first as it is supposed to.  I unfurled and refurled a couple of times with satisfaction, then lowered the furled sail to the deck.
My first impression is that top down furlers are a significant improvement over early gennaker furlers such as the Facnor I have been using.
Sail on furler takes up much less room that the unfurled sail and furler.  They went into the sail bag easily, starting at the head and making loops to the tack furling drum.
I am very much looking forward to using it at sea.
I still have the old, fuller cut asymmetrical on the Facnor furling gear, and still have a vision of setting them both wing and wing on a passage if conditions are right.
———

The most recent front did not live up to its billing.
We had a little rain Friday night and little wind.  The sky began to clear early Saturday afternoon and I was able to sit on deck, listening to music, with a sunset plastic of wine.
Last evening was lovely.
To have a slight change in view I sat at the aft end of the cockpit, just in front of the tiller which was vertical.  New Zealand has just gone off summer time, so the sun was lower than it had been at 6 p.m.  The so called Golden Hour after sunrise and before sunset.

Another neighbor with helicopter.

I’m thinking of getting one for GANNET.  I’ve worked out the landing platform, though it somewhat ruins GANNET’s fine lines, but can’t figure out what to do with the pilot.  Maybe he can live in the helicopter.
Posted by Webb at 9:30 PM