Opua: not a gale; The Strait revisited 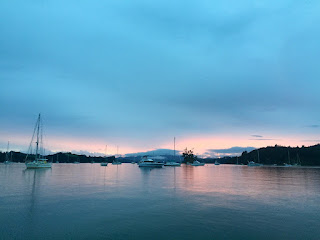 We have a gale warning, but not a gale.  Rain has ended in mid-afternoon and, although the sky is still mostly cloudy, I have hopes of sitting on deck, or at least standing in the companionway, while listening to music after I post this.
The photo is not from this morning, when rain was falling steadily, but yesterday, a moment of unexpected beauty when I first stuck my head above deck.

My comments yesterday about why I prefer to try to sail around Cape Horn rather than go through the Strait of Magellan or Panama caused two readers to suggest that I portage GANNET across Central America in Nicaragua or Guatemala.  One provided a link to a piece about a man who does this.  Ingenious and enterprising, but not for me.  Portages are only honorable if you carry or pull the boat yourself.  If my only purpose was to get back to the West Coast, I could do so by sailing to Florida and having GANNET trucked across.  For that matter if my only purpose was to get back to the West Coast, I never would have left.  But that isn’t sailing, nor is it the point of this exercise.
I only mention alternatives because I have been around Cape Horn twice and spent more than a year south of 40°S and I have experienced storms down there in which I know I could not sail GANNET to windward.
Another reader, Bill, wrote that he sought information about Magellan Strait and found at Wikipedia:  On the Atlantic side, the Strait is characterized by semidiurnal macrotides with mean and spring tide ranges of 7.1 and 9.0 meters respectively.
He continued:  “Almost like sailing in the Bristol Channel, then.”  His home waters.
Indeed.
That still has me smiling.
I have only experienced such tides in northern Australia, where they range to 8 meters/26’.  Perhaps even more.  Where they are constricted, as around Cape York and in the Torres Straits, they result in very strong currents.
Bill also found an excellent, detailed professional guide to the Strait.
One hazard Joshua Slocum did not have to worry about was a couple of thousand ships a year sharing the Strait with him.
Sea room.  Give me sea room.
Posted by Webb at 12:45 AM