Opua: seats and straits and solo and hill and poems and rain 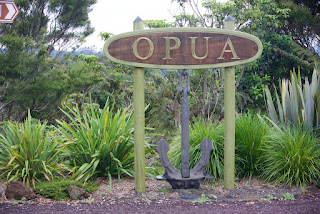 Next month I will have owned GANNET for five years.  I am embarrassed that it has taken me this long to discover the perfect place to sit on deck.  Again last evening I placed the Sport-a-Seat just in front of the vertical tiller.  With the two Megaboom speakers at the forward end of the cockpit the sound is exceptional, and the view forward over GANNET’s vast deck unparalleled.  In mitigation, the location was not perfect until I replaced the traveler bridge with the pod which serves as an unintended foot rest.
This is only an in harbor location.
At sea I would be sitting on the lowered tiller,   uncomfortable and inefficient.

Recently two sailors have written suggesting that I sail through the Strait of Magellan.
There are four ways around and through the Americas:  south of Cape Horn; the Strait of Magellan; the Panama Canal; the Northwest Passage.
I’ve gone around the Horn twice and through Panama three times.
I strongly do not want to take GANNET though Panama.
I would have to rent or borrow a different outboard.  There is no room on board for four line handlers and an advisor.  No place for them to sleep.  No way for me to feed them.  And, without being too gross, no real head.  GANNET’s PortaPottie would not suffice.  There is no privacy.  And I don’t wish to share a bucket.
Beyond that, I dislike losing my freedom in Panama where your boat and life are in the control of others for two days.  Longer if you count the waiting before transit.
I feel so strongly about this that this voyage may end up not being my sixth circumnavigation, but a delivery from the west coast of the United States to the east coast the long way.
It is possible I might change my mind.
I have considered passing through the Strait of Magellan.  Slocum did it in an engineless boat that sailed less well than GANNET.  But I like sea room and would rather take GANNET around Cape Horn if I can.
The Strait is just over three hundred nautical miles.  It’s negatives are huge tides and currents at the Atlantic entrance, deep anchorages, dodging shipping, constant lee shores, and fierce williwaw winds.
I’ve even considered the Northwest Passage.  But that is a thousand miles long, even colder, and with more things to bump into.
———

Not unrelated, a sailor asked if a circumnavigation made via the Panama Canal is really solo when others have to be on board for the transit.
My opinion is that it is.  One gains no longitude from the transit which is less than forty miles long.  I have called my fifth circumnavigation solo, and I believe that GUINNESS has recognized as solo circumnavigations made via the canal.
However I don’t feel strongly about this.
I am known as a solo sailor, but Jill sailed parts of my second, third and fourth circumnavigations with me, and Carol part of the fourth as well.  Had women not been a part of my life, I probably would have sailed around the world a dozen or more times.  And my life would have been much the poorer.
If enough of you want to express your opinion, I’ll report the results.

Light rain during the night ended this morning and I was able to row ashore and walk up the Opua Hill for the first time since I returned.  It was pleasingly easy.
With an overcast sky, the light was muted, but I took some photographs anyway.
The photo above is of the sign at the top of the hill where the road down to Opua branches off the main north/south highway, which is itself only two lanes.
All photos were taken with a telephoto lens which compresses depth of field.
In the one of GANNET taken from the shore, Pine Tree Island in the background seems much closer than it is. 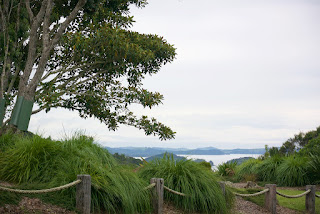 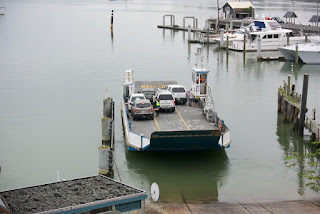 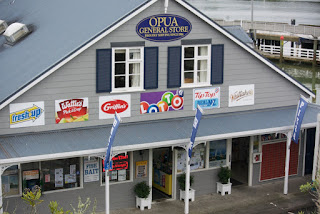 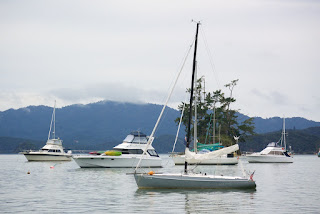 I replaced the spinnaker halyard the other day.
I’ve oiled the interior wood and the flag staff.
I’ve been trying to polish metal today, but every time I go on deck it starts to rain again.
Not a breath of wind.
I doubt I’ll be able to enjoy my new deck location this evening.

I’ve added two pieces to the poems page.
One is the words from the last entry that occurred to me a few evenings ago.
The other is something I’ve worked on for decades and never got right.
I’m not sure either is a poem and may upon reflection remove them. But they are there now.
Posted by Webb at 11:09 PM