Opua: inside a cloud; sea (or land) monster; the birds; Gourmet

Today was supposed to be sunny and with 10 to 15 knots of wind.  Something went wrong.  Complete overcast and mist with no wind at all.  Sometimes the mist turns briefly to light rain, but mostly it is like being inside a cloud.  I have a couple of things I’d like to do on deck, but they require dry surfaces and there aren’t any.
The forecast for the rest of the week is good.  If it is right and if there is wind tomorrow, I’ll sail to Russell to provision and to Roberton Island to row ashore and climb up to the lookout over the main part of the bay, or vice versa, and be gone a couple of days.
When I return to the mooring, assuming I leave, I’ll reconfigure the interior into passage mode and start sleeping on one of the pipe berths.
———

I was awakened at midnight by the roaring, bellowing—I’m not sure what to call it—of an unknown creature.  It sounded most like either a sea lion or a moose, neither of which should be here.  It went on for a while at intervals.  I couldn’t tell if it was coming from the land or the water, and wonder if tonight will see a repeat performance.

Sunday evening was still and beautiful, with a waxing gibbous moon reflecting off shimmering water.
I went back on deck after dinner in The Great Cabin and sat at my newly discovered place in front of the tiller, listening to music and sipping wine.
Suddenly hundreds of terns took off from the breakwater dock and began flying east.  Many of them were flying low, not much above deck level.  The sky was a river of terns, that separated as it approached GANNET and flowed around her bow and stern.
The birds flew up the inlet to the east and did not return before I went below deck. 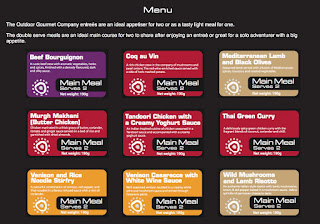 Based on consumption I am one of the world’s foremost experts on freeze dry food.

I have now tried each of the seven new Outdoor Gourmet meals and am prepared to offer my professional judgment.
All are good.  All are innovative.  All are two 400+ calorie servings, which makes them no more expensive than the standard Backcountry Cuisine meals bought in single servings.
By far my favorite is Wild Mushroom and Lamb Risotto.  Magnifique.
I’m not sure I have a second choice.  I like all of the others equally, with the exception of the Venison and Rice Noodle Stirfry, which comes in last.
Several of the meals do not actually taste like what they purport to be.  The Beef Bourguignon is not Beef Bourguignon.  Nor is the Coq au Vin, Coq au Vin.  But both are good.  The Tandoori Chicken does taste like Tandoori Chicken.
Four of the meals come with a secondary packet inside the main pouch.  The Beef Bourguignon and Coq au Vin have instant mashed potatoes.  The Tandoori Chicken, dried yogurt.  And the Wild Mushrooms and Lamb, a packet of parmesan cheese.
Some of these secondary packets are going to present problems at sea and I will probably just mix them in with the main ingredients.
From a few American freeze dry meals that also come in two serving pouches, I know that it is difficult to divide all ingredients evenly, so my judgment of some meals may be influenced by uneven distribution.  I have thus far eaten both halves of four of the meals, but not the other three.
I did not order any Butter Chicken or Thai Green Curry because I was concerned they might be too spicy and thirst-inducing on a boat where fresh water is limited.  I wish I had ordered one of each to test, but didn’t think of it at the time.
Five cooking tips from the JetBoil of Chef Webb.
Add a little more water than called for.  With freeze dry food, too much is far better than too little.
Do not try to pour boiling water into the pouch at sea.  The mouth is too narrow.  You will pour boiling water on yourself and the cabin sole.  Put the contents of the pouch into something like the big plastic measuring cup I eat from and pour the water into it and then cover with something, even a paper towel will do.
After you add the water, stir the ingredients well and be sure all are wet.
Let the meals steep a couple of minutes longer than the stated time.
If appropriate, and it almost always is, add a little wine to the dry ingredients before boiling the water.
I wanted to see what the Outdoor Gourmet meals tasted straight and did not add wine to any of them the first time around.  Obviously Beef Bourguignon and Coq au Vin will benefit from a little red wine.  And some of the others from white.
Bon Appetit.
Posted by Webb at 10:42 PM