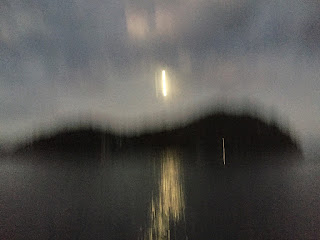 I sailed to Roberton Island yesterday.
I had GANNET ready at 10:30 but there was no wind and I did not drop the mooring until a half hour later.
A beautiful sunny fall day.
The wind shifted, heading us, and we beat most of the way.  Even in moderate wind GANNET heels 20°, which was the angle at which I reduced sail on most of my boats, finding that they sailed faster as well as more comfortably when more on their bottoms.  On GANNET I have accepted that 20° is not unusual and try to carry on until 30° where life on board becomes unpleasantly difficult.
I am still learning that I can see wind angle by glancing down at the Raymarine wind display at the head of the cockpit rather than craning my neck and looking up at the masthead Windex.  I’ve done that so long on so many boats, I probably always will.
When I arrived at Roberton there were a dozen boats anchored there.  I had picked my spot and was heading in under mainsail when a ‘sailboat’—I use the term with reservations:  it was a sailboat hull but had no masts—powered past me and dropped anchor where I had hoped to.
One advantage of anchoring on mostly line rode is that depth no longer matters.
I changed course and anchored in a part of the misnamed Lagoon where I usually don’t, in 45’/14  meters of water.
After we were set I pumped up the dinghy and rowed ashore to climb the trail to the lookout.  Following the moisture the day before, I thought that it might be muddy and slippery, but there were enough fallen leaves and pine needles to provide traction.
The lower part of the trail is a tunnel through forest, 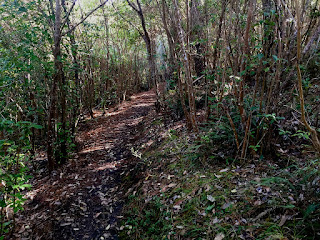 with tree limbs meeting over your head.  Steps have been cut into the upper part and wooden stairways built.

The view from the lookout is world class. 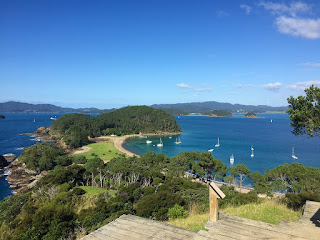 I don’t know how many times I’ve been there over the decades.  I knew that this time was shutting a door.  I might never be back again.  But that was the defining moment.  I had done everything I wanted to in the Bay of Islands for now.  As I walked back down I was shifting into departure mode.

By sunset only two boats were left in the Lagoon.  Both flying the American flag.  The other a 40’ ketch. 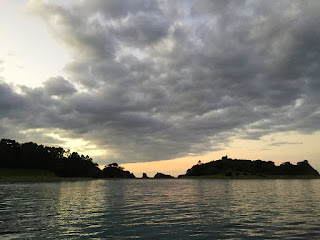 Just before sunset, while standing in the companionway, I watched a gannet cannon ball into the water and come up with a fish.  After a gulp he flew to the east, perhaps to Bird Island.
After dinner of the second half of Mediterranean lamb and olives, I went back on deck, listening to music and sipping wine.  A full moon rose over the island.

I have described it as magic, but it wasn’t.  It was natural and certain.  There is a lot of beauty here if you expose yourself to it.

With a light south wind, I had the anchor up at 8:30 the next morning.  Lifting 45’ of line is easier than 45’ of chain.  Which is not to say that I don’t think that all chain rodes are best.  But if you can avoid chaff and have a good deployment bag, line has its advantages.
Another sunny, light wind day.  The Bay of Islands may be becoming San Diego south.
I had to beat my way to Russell and had the anchor down there beyond the mooring field at 10:30.
I rowed ashore an hour later, was a few minutes early at the Duke of Marlborough, which begins serving lunch at noon.  Kind Kiwis seated me and brought me a glass of sauvignon blanc before, shortly after twelve, salt and pepper calamari.  I’m sure other items on their menu are good, but I’m not there that often that I get tired of my favorite.  This was followed by a Black Doris plum ice cream from a shop around the corner.  I don't know who Black Doris was but she is a good plum.  And then shopping.
I rowed my acquisitions out to GANNET, raised anchor at 1:45 and was back on the mooring at 3:30.
As we approached Opua, a gannet flew past us heading north, without a glance.
Getting on the mooring was not easy.  The wind was from the east, creating rebound off the breakwater.  The tide was coming in strong and the combination of currents killed GANNET’s momentum.
I came up a few feet/less than a meter short twice and was stalled, going stern first, with no response from the rudder, before I fell far enough off for the mainsail to fill.
The third time I aimed past the mooring and let it come along side where from GANNET I was able to reach over from the cockpit and grab the float.  Perhaps unfortunately, though I didn’t think of this at the time, with my left hand which is connected to my damaged left shoulder.  I secured the line from the float to a beam cleat, released the main halyard, centered the tiller with the tiller pilot.  And then ran a line from the float to the bow cleat and manhandled the mooring pennant to the bow cleat.  Not elegant.  But done.
An hour ago I made a departure list.  I love it here, but I am done.
I will be ready to leave Monday or Tuesday, depending on when I see the officials.
Of weather, I would like to leave with the wind from some angle other than directly ahead, and I would like not to leave in a downpour.
Once at sea, I don’t worry about forecasts because I expect I can deal with whatever happens.
I just downloaded a GRIB with Craig’s LuckGrib.  I will not use it at sea, but I expect I will always use it before beginning a passage.
Next week looks good.  The wind will be light and from the south and east.  GANNET goes in light.  The new G2 will fly.  Maybe the older asymmetrical as well.
I love being here.
I love being with Carol.
But it is time for me to sail oceans.
Posted by Webb at 5:14 AM