Opua: meals for the rest of the year; heavy breathing; Chay Blyth? 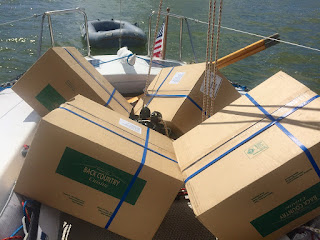 Actually part of next year, too.
My order of freeze dry meals from Backcountry Cuisine arrived in the four boxes.  I couldn’t fit them all in the dinghy and had to make two trips.
At halftime during the NCAA basketball championship game I listened to on Internet radio, I opened the boxes and stacked identical meals which resulted in this. 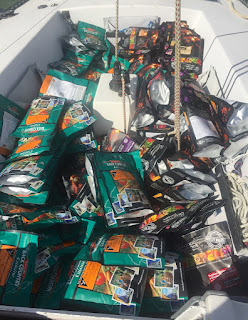 If you have been reading this journal for a while, you may remember a similar photo taken in San Diego two years ago.

After the great game was over, I went out and packed the meals into double trash bags.
Reading the details on the packages I learned that the Outdoor Gourmet meals really are two servings of more than 400 calories each.  In planning I had counted them only as one meal and now find I have 70 more than expected.  This, along with about thirty meals still on board from the U.S., which I mixed into the bags for variety, resulted in my ending up with nine bags of 32 or 33 meals each.  Considering that I eat ashore from time to time, I’m good to South Africa and beyond.
I did not do exact calculations, but the average cost per meal is about $4.00 U.S.
The next step was to clear off the starboard pipe berth and slither aft.  All nine bags are now stowed in GANNET’s stern.
I ate one half of an Outdoor Gourmet Coq au Vin last night for dinner.  I poured all the dry ingredients into the big measuring cup, divided them in two, returned half to the pouch for another day, and poured boiling water into the cup, from which I ate.  It did not taste like Coq au Vin.  Nor did I expect it to.  But it was unusual for a freeze dry meal and good.  I’ll try a different Gourmet tonight.

———
Loud breathing just outside GANNET’s hull woke me in the middle of the night.  Then a rush of motion enough to rock the little boat.  I sat up and stuck my head out the forward hatch.  Dolphin were playing or hunting all around us.  There are many dolphin in the main part of the bay, but I have never before seen them in Opua.

As I was rowing ashore yesterday, a a man in a dinghy with outboard began following.  When he came alongside, he, called, “Chay Blyth?”
I said, “No.”
Disappointment on his face.
Thinking I understood the cause, I said, “Webb Chiles.”  And then, being a mega-narcissist, naturally I added, “Even better.”  Sorry, Sir Chay.  I did say it with a smile.
The man slapped himself on the forehead and said, “That’s who I meant.”
We chatted as we continued to the dinghy dock.

My reference in a recent post to my last few days here caused some confusion.  GANNET and I are ready to depart, all but a final grocery and liquor store run and filling jerry cans with water.  But I do not intend to sail before the last week of this month at the earliest.  I love being here and wish to savor these days, knowing that when I leave this time I may never return.

Two readers asked if the top-down furler furls all the way down from top to bottom.  It does not.  When you pull on the continuous furling line, it begins furling down from the head.  When it has furled about ⅓ of the way from the head to the clew, it also begins furling up from the tack.  The furling meets nicely at the clew.  All, at least in extremely light conditions, as easy as pulling up a window shade.
While ProFurl advises against leaving the furled sail in place while beating to windward, under certain conditions the furler and sail could be raised at mooring or dock, ready to be used.

When I first bought my MegaBoom speakers, I noted that they have outstanding stereo sound when paired, but that the process of pairing them was unreliable.  Ultimate Ears, the manufacturer, provided a software update a while ago.  Since then pairing, which can be done with the free app or manually by pushing buttons on the speakers, has been 100% reliable.
When I bought the MegaBooms, they were water proof, but the smaller Booms were not.  UE has recently come out with the Boom 2, which is waterproof and costs $100 US less per speaker than the MegaBoom.  I’m not going to change, but that is what I would buy if I were buying now.
Posted by Webb at 10:09 PM