Hilton Head Island: a start; a sign; a poem 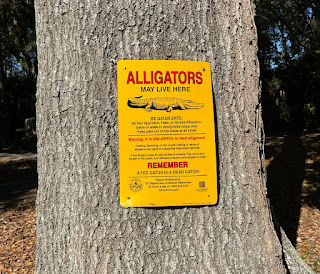 I said I would and I did. I biked to GANNET this morning and worked for three hours removing and cleaning the forward hatch and the deck beneath it.  Tedious labor and on GANNET often performed in awkward positions.  Sixteen bolts to be removed along with butyl tape and LifeSeal.  The butyl tape was still soft and pliant.  I don’t recall exactly when I last rebedded the hatch, but it was several years ago.  Possibly before GANNET’s circumnavigation.  I stopped when my ancient back cried, ‘Enough.’  I cleaned up the considerable mess I had made and dropped the hatch back in place.  Hopefully I will finish tomorrow.  Wistfully the hatch will never leak again.

Above is a sign you probably don’t have in your neighborhood.  Carol and I saw it a couple of days ago when we walked through the site of Civil War era Fort Mitchell, our next door neighbor.  There were two of these signs on the grounds and we later saw another farther along Skull Creek Drive. We don’t recall seeing them before, and we have only ever seen one alligator from our condo.  It was floating between the shore and the marina late one afternoon.  A man on another boat said he saw an alligator on the shore beside the pier leading out to the marina one morning.  Earlier this year a woman about my age was grabbed by a gator on the edge of a pond behind her back yard who tired to drag her into the water.  She was saved by her neighbors, one of whom beat the alligator about the head with a shovel until he let go, but that was two miles from here.  Nevertheless I am not tempted to go into Skull Creek to clean GANNET’s bottom.

I finished reading THE ANCHOR BOOK OF CHINESE POETRY.  I have been reading a few poems in it every afternoon for several months.  The book claims to cover 3,000 years from ancient to contemporary.  I much prefer the old poems to the new. Almost all the contemporary poems were written by Chinese in exile.  That is to be expected.  If they weren’t, we would never have heard of them.

An exception is a poem by Yang Lian, who was born in 1955 and now lives in London.  It is titled ‘To a Nine-Year-Old Girl Killed in the Massacre.” 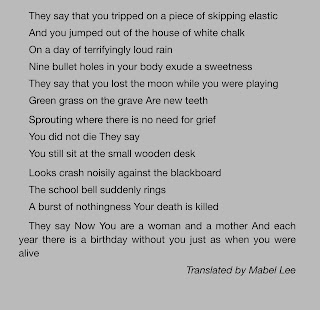