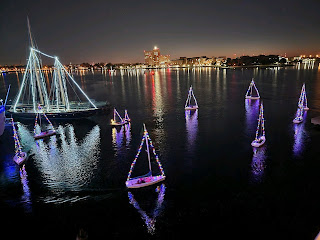 I saw the above beautiful photo on Steve Earley’s site and immediately wanted to share it with you.  I thank Steve and his friend, Lynn Schoenbaum, who took the photo, for letting me post it here.  It is of boats circling before the start of the Norfolk Christmas Boat Parade.  You will note a small yawl just to the left of center.  That is Steve’s well traveled and well sailed SPARTINA.  Steve advises that if you look closely you will find Rudolph on the bow.

You can view this also at Steve’s site and catch up with the notes on his recent fall cruise.

Carol has flown back to the frozen Midwest for three weeks, leaving me a pot of turkey, barley, vegetable stew/soup, which may last me that long.  We had bowls for dinner last night and I will eagerly have another tonight and several more nights to come, though not consecutively.

If I do nothing else this week—and probably I won’t—I am resolved to rebed the forward hatch.  I have been putting it off, partially because I am reluctant to tear things apart again and partially because I expect that after doing so the expletive deleted thing will still leak.  Here is Hilton Head’s weather forecast for the next seven days. 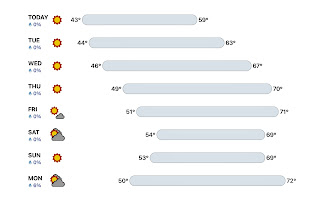 Pretty nice for the beginning of December in the Northern Hemisphere—I know it is the beginning of summer for those of you on the better side of the Equator.  I do hold the world in my mind—and as you can see I have no excuses.

Very nice photo. I had dreams of lighting up my new to me ‘78 Lugger for the boat parade in Jacksonville FL this year but will have to try next year as I am in the beginning stages of a full topside makeover. Good luck with the boat projects, I hope the turkey doesn’t make you too sleepy. Thanks for all the inspiration!