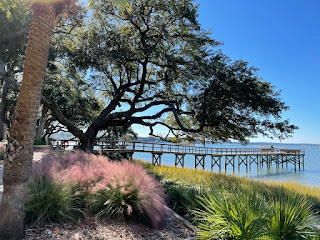 I biked to GANNET yesterday and comprehensively bedded the hatch.  I used two layers of butyl tape and wrapped each bolt with a collar of butyl tape.  I returned this morning and hosed the hatch.  I then hopefully went below.  I would like to report that there was no leak, but sadly I cannot.  There were several drops of water below the middle of the aft end of the hatch.  No water came from the hatch flange.  I believe the leak is at the hinge.  Two screws go through the hatch to a small plate on top.  I will let this dry.  Put a piece of tape over the plate and hose again.  If dry below, I have found the culprit.  If not…sigh.

A few readers have asked for photos around the neighborhood.

First a Google view of the neighborhood. 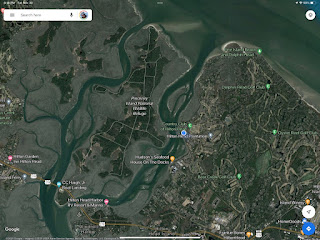 That is Skull Creek from the only bridge onto the island at the bottom to Port Royal Sound at the top.  The image was taken sometime since early September of last year because GANNET is in it as perhaps you can see in this close up.  She is the fourth boat opposite the ferry. 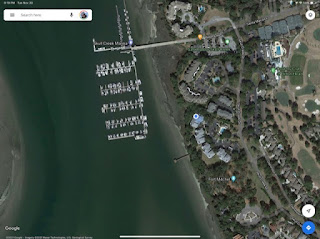 The top image is of our condo development’s pier.  It ends in a platform with rocking chairs to enable those who don’t own a boat to enjoy being on the water.  People often gather there for evening drinks. 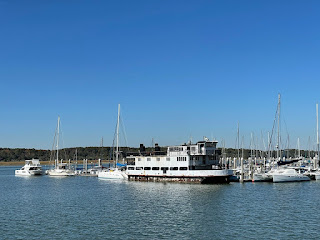 Here is the ferry from our pier.  It looks even worse from this side.  The US Marshall’s signs are still on it, but nothing has happened. 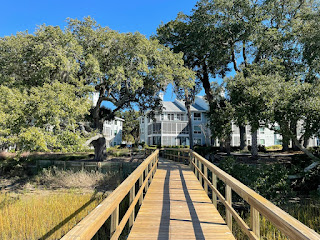 The only canon at Fort Mitchell.

The Civil War began with the firing on Fort Sumpter on April 12, 1861.  Less than seven months later on November 7, 12,000 Union troops landed and took Hilton Head Island is what was the largest amphibious landing until D-Day in WW2 in order to secure Port Royal Sound.  Overwhelmed Confederate troops escaped across Skull Creek.  More than a thousand slaves on the island were the first to be freed by Union troops.

Savannah, only a little more than twenty miles away, did not fall for three more years until General Sherman occupied the city on December 21, 1864. 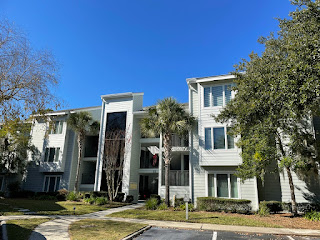 Our building.  This complex is called Indian Springs presumably because there once was one here.  It consists of four identical three story buildings with three units on each floor.  Some are three bedroom, some, including ours, are two bedroom.  We are the middle unit on the third floor and have the advantages of an open deck and a screened porch. 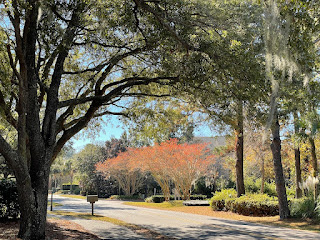 Hilton Head remains mostly green year round, but some trees lose their leaves and there is some color. 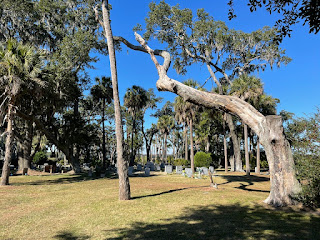 The African Americans who lived on South Carolina’s sea islands and low country were known as Gullahs and some still are.  There is a Gullah cemetery near the pier that runs out to the marina.  Many of the markers date back a hundred years, but people are still being buried there. 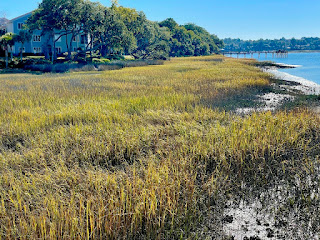