I happened across this tale at Apple News+ of unbearable suffering.  Rough, sleepless nights at sea.  I can’t imagine.  We must have sympathy for the mega-rich. 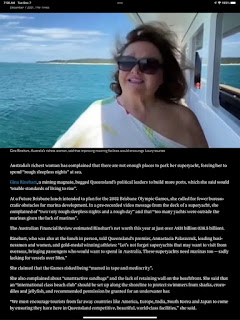 As I presume you know, eighty years ago today Japan attacked Pearl Harbor in what many of her naval leaders knew was a tragic mistake even as they carried it out.  I was twenty-six days old.  I have no memories of WW2, though perhaps those of us who were infants and young children then were unknowingly affected by our parents fears.  My father and step-father were both in the US Army though neither saw combat.  What is odd to me is not that we kill one another in terrible ways, but that at some point it stops and we become friends with our former enemies.  After WW2 almost instantly in fear of our former ally.  We are a strange species.
It is said that the German philosopher, Immanuel Kant was so punctual in taking his walks that his neighbors in Konigsberg could set their clocks by him.  I am not that reliable, but if you think that around 4 PM in whatever time zone I am in I am working out and that at 5 PM I am pouring a drink, reading some poetry—having finished the Chinese anthology, I bought a collection of Japanese—and then listening to Bach, you are right.  Also for the year beginning July 1 I am reading the daily dairy entrees in THE ASSASSIN’S CLOAK.  Two hundred and eight years ago Lord Byron wrote: 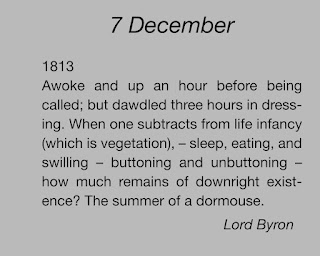 From the anthology, BEING HUMAN, a poem that I had not read before by the Portuguese, Fernando Pessoa. 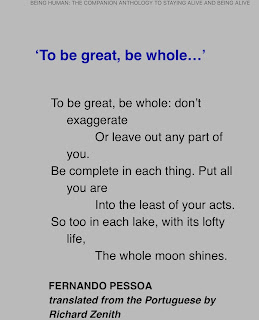 I biked to GANNET today and sealed the tube through which the masthead electrical wires pass through the deck.  I could see where the sealant had pulled away from the tube.  I hope I fixed it.
Tomorrow for the first time in a month we are due to have rain.  I will soon know.
You may recall that I am very much taken by Joan Armatrading’s song and video of “I was already there’.  I have since sought more of her music.  I don’t like it all, but I like some exceedingly.
Here are the links to videos of two of her songs, ‘Dry Land’ and ‘It Could Have Been Better’.
You will observe that the boats in Dry Land are not my kind of boats, but while I am at home at sea, I have longed for dry land.  Never more than after the five month passage in EGREGIOUS around Cape Horn when she was sinking beneath me, after the two week drift when CHIDIOCK TICHBORNE was swamped, after the twenty-six hour swim after I sank RESURGAM.
The video of ‘It Could Have Been Better’ is as much about the elegant grace of Fred Astaire, born Fred Austerlitz—his backstage parents changed it so the public would not associate it with the Napoleonic victory—as it is about the song itself.  He was born at the right time.  Today his grace would have no place and he no career.

As someone who helped design and build Gina's first port, I take it seriously when she says she wants a marina. My only question is how many tax dollars will be spent on her new pet project.