The leak is found.

I biked to GANNET this morning, covered the plastic plate into which the hinge screws go with duct tape, and turned the hose on the hatch.  When I went below there was a puddle on the v-berth cushion aft but not directly under the hinge.  I got a flashlight and examined the overhead in the vicinity of the hinge and the aft edge of the hatch.  It was dry.  Then a drip fell on me not from the hatch, but from where the masthead electrical wires pass through the deck.  Eureka!  Or words to that effect.  I returned to the dock and turned the hose on the tube that channels the wires being careful not to turn it on the hatch.  Down below again a puddle.  When it dries I will attempt to fix it.  Possibly I didn’t even need to rebed the hatch, but it is done.  The tube through which the wires pass should be easier.

I thank Bob and Bev for a link to an interesting article and video about a voyage and a storm I had not heard of.

After recovering from the passage, he crossed to Puerto Rico which he left on his next leg with an ultimate destination of New York City one hour before a hurricane warning was issued for what became a Category 5 storm and the second deadliest in North American history.  It was named the Okeechobee hurricane because most of the dead were killed near that Florida lake when a dyke gave way.

Here is a link to the article if you want to read more.  The video is imbedded in the article.  I watched it.  It is well done, though there are some images of a kayak sailing with jib and mainsail which I doubt is how Romer’s was rigged.

I think he took too much water and too few hats.  His average of 35 miles a day would have mostly been due to current.  I don’t think his sail did him much good.  And I doubt he went five days and nights without sleep.

Of hurricanes, naturally media came out with articles after the official end of this year’s season on November 30.  I think they are deceptive.  Merely counting the number of named storms is fallacious. 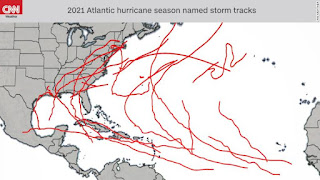 Not all lines are created equal.  Storms are named when they reach Force 8, 34 knots.  That is not seriously bad weather.  Hurricanes began at 64 knots.  Even that in my opinion is not cause for alarm.  If you look closely at the above, three of those tracks passed over or very near Hilton Head, hardly being noticed.

Here are the tracks of major storms. 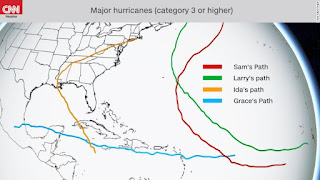 If you live in Southern Louisiana, parts of New England and Mexico, you had a bad hurricane season, but for most of us it was a mild one despite the number of named storms.

I had to compress this to get it under the Blogger 100 mb limit so it is a little fuzzy.  Taken last evening from the screened porch, I wanted to share the serenity.  The music is from Erik Satie’s Trois Gymnopedies.
Posted by Webb at 4:02 PM

Lovely Music and view. So glad you found the source of the leak!

As far as canoe sailing, I think his small sail helped him a lot. On my kayaks and canoes I often use a small sail between 0.7 and 1.5 square meters. It adds a lot. It may be that paddling makes tha apparent wind angle better, because I often find myself doing 4 knots while thinking my paddling effort is an easy 3 knots. None of my boats have a leeboard or keel boat but the sail adding to my effort more than half of the time which works out to 30 mile days with the sail feel like 20 mile days with just the paddle.