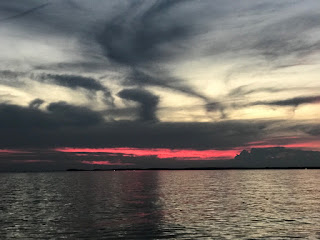 I woke several times during the night and there was always light wind,  No waves.  GANNET as comfortable as in a good anchorage.
At 3:30 AM I got up, put the fully charged battery back on the Torqeedo shaft, tilted the shaft out of the water, raised the anchor which came up clean, and set sail.We covered a mile at 1.5 knots before the wind died.  We drifted for a half hour before it returned, again from the south and are now actually sailing for the first time since leaving the dock yesterday.  4.3 knots on a close reach down Eastern Bay, waiting for dawn.  Bow wave gurgling.

3:00 PM  I anchored an hour ago five miles up the Little Choptank River in about 11’ of water, depending on tides, which only range 2’ today.  I have out 120’ of rode to a well set Spade anchor, with good protection from the north and northwest, the directions from which the strongest wind is expected.
Ten knots of wind from the SSE came up late in the morning and I was able to sail all the way in and anchored under sail.  GANNET sails faster than she powers.
I expect to be here until at least Saturday, so I put the mainsail cover on, tied the tiller down, and after lowering the Torqeedo into the water and starting it to see if it would, I removed it and brought it below.
Low country with tall trees and a few scattered houses.  One large building I passed on the way in may be a condo.
Lots of birds, pelicans, terns, gulls.  No gannets.  And yesterday I saw a crab swimming.
I believe we sailed 29 miles today.

The photo is last night’s sunset on Eastern Bay.
Posted by Webb at 3:17 PM