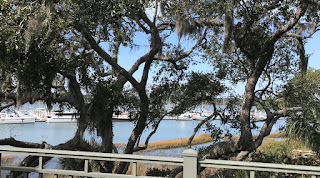 Carol and I are back from a quick trip to South Carolina’s Hilton Head Island, where we may, or may not, have bought a waterfront condo.  Our offer has been accepted, contracts signed.  The uncertainty comes from several serious issues that were revealed during Monday’s official inspection.  Proceeding with the purchase will depend on how, or  not, they are resolved.
As has been pointed out, ‘old folks home' should be singular.  Carol is not old and will not retire for several more years.  I am old and either will never retire or, as my late grandmother wryly observed, have been retired since the day I graduated from college.
Hilton Head is a very nice place, but not my first choice for what will probably be my last shore home.  As those of you who have loyally endured here for a while know, New Zealand’s Bay of Islands would be my first choice if immigration rules made that possible and San Diego’s Mission Beach my second if property values had not become astronomical.  A THE HAWKE OF TUONELA size boat would be third, actually first,  but Carol has served her live aboard sentence.
Hilton Head Island is shoe-shaped, about eleven miles long and six miles wide at its widest, slanting northeast to southwest.  The southwest end is the toe.
The island runs on tourists, retirees and those who service them.
In 1970 the population was around 3,000.  Now it is 40,000, but the development has been done intelligently and tastefully.  2.5 million visitors come each year, but large parts of the island, including where we may live, are gated communities inaccessible to any but those who reside there and their guests.
The island is too hot in the summer, subject to hurricanes and the occasional alligator strolling across a golf course, but it has mild winters, miles of beaches on which you can walk and ride bicycles, in addition of course sunbathe—something I do not do—swim and surf.
Our potential home is on the landward side, facing a part of the Intracoastal Waterway known as Skull Creek.  The Skull Creek Marina where I could keep GANNET with easy access to the open ocean is on our doorstep as can be seen from the photo above taken from the balcony of our possible unit.
On the other side of Skull Creek is the Pickney Island National Wildlife Refuge.  We would look out on beauty: trees, the marina, water, wilderness.  The community is very, very quiet.  And the sunsets are famous.
Whether this becomes the place from which I eventually totter off into one of those sunsets will be determined relatively soon. 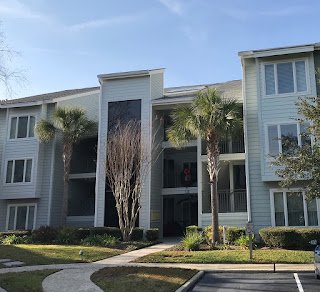 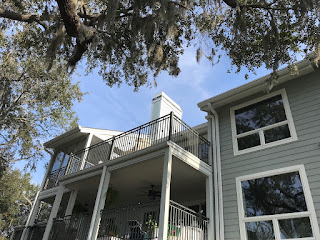 The top windows and balcony would be ours.

We flew from Chicago to Charlotte, North Carolina, and then from Charlotte to Savannah, Georgia, driving the last 50 miles to Hilton Head in a rented car.  According to my Apple watch, we walked 4.9 miles that day, almost all inside airports.

In case you are wondering, I will, time and chance permitting, sail GANNET—assuming she is ever repaired—to San Diego via Panama to complete the circumnavigation.   It makes no financial sense to do so, sailing 5,000 miles and then spending thousands of dollars to have the little boat trucked back across the country, rather than sail her 550 miles north from the Florida Keys to Hilton Head.
Despite the majority who think so, money is not the measure of all things.

While waiting for our return flight to Chicago at the Charlotte airport all the seats were occupied except for one beside an empty four marked ‘Handicapped.”
Carol took the one and I took a ‘Handicapped.’
If confronted I was prepared to justify myself by pointing out my half blindness, partial deafness, almost severed supraspinatis, and that I am 76 years old.  To my slight disappointment no one had the least doubt that I belonged there.
Posted by Webb at 2:44 PM