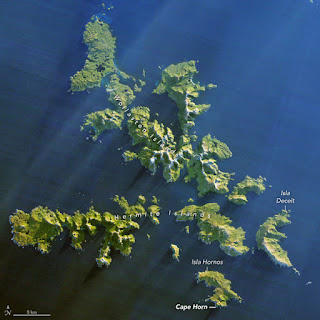 The above image is a satellite photograph of Cape Horn taken on July 12, 2014 and today’s NASA earthobservatory image.  At first glance I did not recognize it, though I have studied charts of the area extensively and sailed those waters twice.  I've seen those islands as gray, not green.  I still have Cape Horn as a favorite on the Windfinder Pro app, which shows current wind to be 29 knots from the west, temperature 43ºF/6ºC and rain.  It is colder in Evanston:  22ºF/-5.5ºC and snowing.  But here it is winter.  Off the Horn, it is summer.
If you go to the site, you can read how Charles Darwin spent the days just before Christmas in 1832.

When I was young, growing up some three hundred miles to the SSW and dreaming of the ocean, I avidly read Irving Johnson’s articles in NATIONAL GEOGRAPHIC about his voyages in the brigantine YANKEE with paying crews.  He and his wife Exy made seven eighteen month circumnavigations in the YANKEE.  If I remember correctly, in less than a year after she was sold, the new owner wrecked her on the reef at Rarotonga in the Cook Islands.
A few days ago Greg sent me a link to a YouTube video, The PEKING Battles Cape Horn, shot by Irving Johnson as a young man in 1929.  I thank him.  The PEKING was one of the last of the great sailing ships to remain in commercial service and the video is truly amazing, in part because of the daring of Johnson himself.
Posted by Webb at 10:54 AM