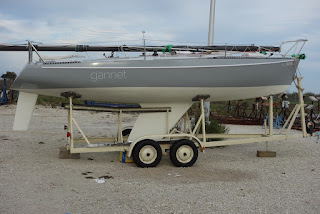 The photos of GANNET Karen forwarded last Friday gave me enough confidence to make my reservation to fly back to the little boat.  I fly on Tuesday, January 9, not coincidentally the day after the college football championship game.  The one way basic economy fare Chicago to Ft. Lauderdale on United:  $40, of which the airline only gets $23.26.  How is that even possible?  The rest is taxes.  United will make another $25 from me because I will check a bag, but still.
————

In the chapter of BRAVE COMPANIONS about Miriam Rothschild, one of the Rothschilds who was a self-taught scientist of great repute and lived in the English countryside, she is quoted, “In the city it takes such a lot of energy to cut out the things you don’t want to hear and you don’t want to see.”

In the photo above GANNET is awaiting her tow west to San Diego with freshly painted topsides and bottom.  The photo is dated October 1, 2012.  Five years and 25,000 miles later, her topsides need painting again.  It might even happen next year.
Posted by Webb at 3:04 PM