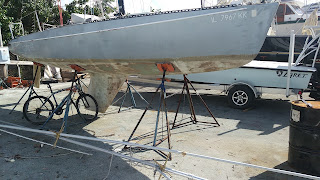 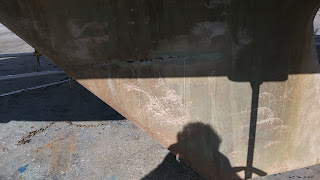 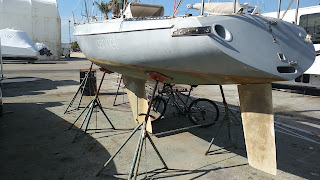 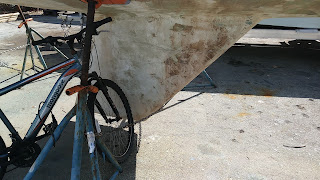 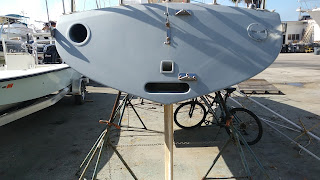 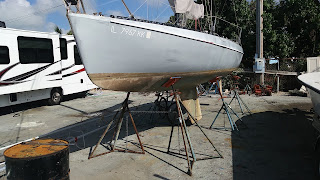 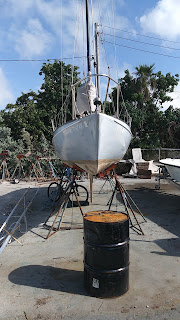 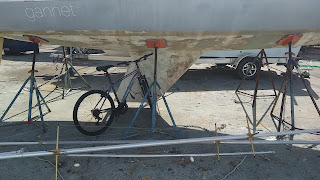 I was finally able to get through to Sherry, co-owner and service manager of the boat yard, who affirms that they still intend to get the repair completed before the end of this month, hopefully devoting full attention to it next week.  I would like to make my flight reservation, but will hold off a little longer.
The photos of GANNET were taken this morning by Bob, whose own small boat is on a Boot Key Harbor mooring.  It appears that they have ground the old anti-fouling paint off the port side of the keel.  A start?
I thank him and I miss her.  It has been far too long.

I thank Hugh for links to three short all but incredible videos of world record kite sailing.

Matt suggested I list my ten or fifty favorite books of all time.  An interesting idea.  I’ve started.  You might be surprised at the the first book that leapt to mind:  THE HORSE’S MOUTH by Joyce Cary, the best novel ever about an artist, also made into a pretty good movie starring Alex Guinness.  I once considered naming a boat after the main character, Gulley Jimson.

A clarification.
I received an email questioning the sentence in the last entry:  I receive Social Security, one of the worst deals the government ever made.
I did not mean that Social Security itself is a bad deal, only that Social Security made a bad deal with me specifically who would when young have foolishly opted out if I could have and have now received far, far more than I paid in, though the math is complicated by time and inflation.
I apologize for not writing more clearly.

A link to two outstanding ‘Season’s Greetings’ boat photos from Kent and Audrey.   Click on them.  They are best enlarged.
I thank Kent and Audrey and extend the sentiment to all of you.
Posted by Webb at 4:17 PM