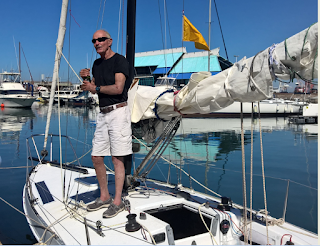 I thank Chris for the above photo which almost unbelievably to me was taken only last year.  On August 24 to be exact.  It seems much longer ago.  I have just arrived in Durban, South Africa, after the 6,000 mile passage from Darwin, Australia.  You can see the Q flag flying.  As Chris noted I am holding my beer in a seamanlike manner—with both hands.  I was then a mere 74 years old.
And I thank Andrew for a link to a blog in which “Webb Chiles, the madman intellectual” is mentioned.  Kindly.
That is a new one and brings a smile.
I don’t think I’m mad, but then none of us madmen do, especially those in politics, and I don’t consider myself an intellectual, though I am often mistaken for a retired college professor and seldom by those who don’t know me as a sailor.   Long ago I realized that whatever I look like is what a sailor looks like.
Though a few of you are academics, I don’t move in intellectual circles.  Or any circles for that matter.  Except around the world.
I do suspect that I may be the best read person ever to sail alone around Cape Horn and might be the only one to play Bach there.
But an intellectual?  No.  If a madman, a very calculating one.  But then all of us madmen are.
Since I’m writing about myself, as always, I recently saw a challenge to define yourself in six words.  I can do that:  An artist of words, wind, women.
To expand slightly:  The body of an athlete, the brain of a scientist, the soul of a poet:  all world class.
On that immodest note, I leave you for the year.
Forgive me for amusing myself and have a splendid 2018.
Posted by Webb at 12:41 PM