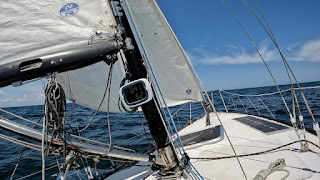 There are four short new videos, St. Marys and Back, on my YouTube channel.

Here is something I wrote to my friend, David, last evening in a response to an email he sent about my decision not to sail to Iceland.  If you have wondered, I have not wavered in that decision for a moment.

Your email caused me to think, which is not an all bad thing.
I don’t believe I am seeking problem free sailing or an absence of discomfort.  Suffering may be too strong a word.  The problem has been that since the end of my sixth circumnavigation none of my destinations has had any real meaning for me.  They were artificial and not worth the discomfort and sometimes frustration which arose.  I turned back from sailing around Bermuda because of lack of wind.  That had a lot to do with the final passage from Panama to San Diego which I look back upon as one of the worst I’ve ever made.  Not because of bad weather, but because of lack of wind.  Even though that was now three years ago, I can still feel the all but unendurable frustration.  Until Monday I have not had any enjoyable sailing for more than an hour here and there for a long time.
Going off in GANNET and following good wind angles for maybe a week or two would provide good sailing for that length of time.  Coming back would almost certainly provide problems and perhaps discomfort.  But the destination—home—would have real meaning and be worth the effort.  I have not seen all the world, but I have seen enough, and there really isn’t anywhere I want to go except to sea.

Well stated Webb, thanks for putting that into words.

On my brief solo cruises there comes a time when I discover that I really miss my wife and my dog and know that it's time to head home, even when I could stay out longer. At that point, beating upwind in cold rain doesn't matter, I'm happily headed for the barn.

Of course two weeks later I can't wait to head out again.