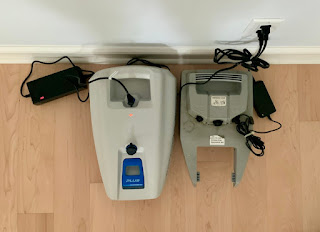 The 300 watt inverter arrived Thursday afternoon.  Friday morning I biked to GANNET, hooked it up and attached the Evo charger.  It lasted less than a minute before shutting down.  I tried again.  Same result.  I biked back to the condo and telephoned the dealer in Miami from whom I ordered the Evo.  I had called him before I sailed to St. Marys asking about the direct DC charger shown on ePropulsion’s site, but he never called me back.  The situation was now more critical.  If I am unable to charge the Evo battery while underway the outboard is useless to me.

According to the man I spoke with there are no DC chargers presently available in this country.  A shipment is on the way, due later this month.  I placed an order.  I understand there are supply line problems.  I am skeptical about when I might get the DC charger.

I have a DC charger for the Torqeedo as well as the standard AC charger which you can see in the photo above.  On a boat a DC charger makes sense.  Using an AC charger with an inverter you are turning DC into AC and then back to DC.

However in talking with the salesman I learned something possibly encouraging.

I told him my unit had failed to hydrocharge on the way down to St. Marys and asked if possibly that was because the unit was too close to the 90% discharge level below which hydrocharging is supposed to began when sailing at four knots.  He said possibily and then related the necessary conditions for hydrocharging:  battery at less than 90%; sailing at four knots +. magnetic kill switch in place, unit turned on.  A light flashed in my mind.  I don’t believe he mentioned another condition that is stated in the owner’s manual:  that the unit be in neutral.

After hanging up I reread the section on hydrocharging.  It does not state the the unit must be turned on.  Perhaps this is assumed to be obvious.  It is not to me.  When I started sailing GANNET I turned the unit off.  From time to time while sailing to St. Marys I turned it on to check the charging.  When I did the charging icon flashed on and off as it should to indicate charging though I never saw an increase in the charged level beyond the 86-87% it had when I stopped powering, but then I turned the unit off again.  Possibly this was the problem and there is hope.

The Evo battery is decidedly bigger in size and capacity.  It weighs 19.2 pounds compared to the Torqeedo’s about 14 pounds.  I thought the Torqeedo battery weighs only 10 pounds, but checking online I see various numbers in the 13-14 pound range.

The Evo battery capacity is stated as 1276 watts.  The Torqeedo as 915 watts.  If my math is correct the Evo capacity is 39% greater.

When I can I will go sailing and test the Evo hydrocharging again.  I have hope.

While sailing to St. Marys and back I thought that if I dropped my iPhone, my only remaining charts would be on my iPad Pro and decided to add another backup device.  On Friday I ordered an iPad mini.  It arrived yesterday and was easily and quickly set up exchanging data with my phone and an iCloud backup, except for iNavX.

With iSailor all I had to do was click ‘restore purchases’ and all my charts were soon on the mini.   iNavX only permits downloads to two devices and  iPad charts are not compatible with iPhones.  I still have the world wide Navionics charts I bought for iNavX on my iPad Pro.  These are no longer even available through iNavX.  I cannot get them onto my mini.  I deleted the iNavX app on the mini.

Webb, Have you tried Emarine Systems in Ft Lauderdale? I ordered my motor from a CA “dealer” who did not stock anything and got my gear 6 months late. When I later ordered the dc charger from emarine it shipped same day. If emarine doesn't have it in stock it might be worthwhile to pick their brain about using a programable victron dc/dc charger instead or the stock emarine unit. I have found that the regen works surprisingly well. Have you considered mounting the battery remotely using the extension cable they offer? I put my battery in a cockpit locker and it is a joy only having to handle mounting and dismounting the motor. Best, Shane

Thanks for the good advice, Shane. I appreciate it and the thought behind it.

I called Emarine. They do not have a DC charger in stock, but said they would check to see when one will be available. Late in the day they called back to report that they had not yet had a response from ePropulsion and would get back to me tomorrow.

I investigated the Victron. I have not yet discussed it with Emarine and am inclined to wait for the ePropulsion charger, particularly if I can get the outboard to hydrogenerate. I am stuck ashore this week to receive deliveries. Maybe I can sail next week.

Of the battery, not having to fit it on the outboard leaning over the transom would be a joy, but GANNET has no cockpit lockers and no place to stow the battery on deck.

I had discovered that for me it is easier to get the battery onto the shaft when I have turned the shaft at right angles. Still considering that the difference in weight between the Evo and the Torqeedo batteries seems to be only five pounds and not the ten I thought, the Evo is significantly more awkward to handle. It may have to do with size and balance of weight.

If it hydrogenerates, all will be good.

It’s an absolute bugger being a pioneer. In ten years all this arcane stuff will seem absurd as boats potter hither and yon regenerating as they go.