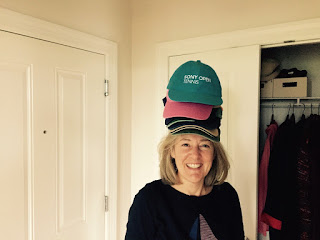 Pelican walks into a bar.  Bartender looks up and says, “Why the long face?”
These are the last words in Judy Irving’s entertaining documentary, PELICAN DREAMS.
Judy Irving is a clever filmmaker.  We watched and enjoyed her previous film, THE WILD PARROTS OF TELEGRAPH HILL, which I wrote about somewhere back in this journal whose first entry is dated nine years ago tomorrow.  Forgive me for pausing a moment to consider if I will still be writing nine years from today.  And if I am, if anyone will still be reading.
There is a fair, if slightly tepid review of PELICAN DREAMS in the NY TIMES.
I like birds, perhaps because they are more a part of my ocean life than any other creatures.  When I  think about what I would like to be if not homo sapiens, I consider dolphins, but they are social animals.  There is no such thing as a lone dolphin.  So probably an albatross.  A wandering albatross gliding endlessly around the world above the Southern Ocean.
I lived in California in the early 70s when pelicans almost became extinct because of DDT.  I’m very glad that we wised up in time, for once, and that they didn’t.
I look forward to whatever film Judy Irving makes next.

An exceptionally well written article about a trip around Lake Michigan appears in the NY TIMES.
Except for a single sentence, I think Rich Cohen has it all right.  The sentence:  No one has ever swum across its broadest portion, though now and then a nut canoes it.  A clear example of someone turning personal limitation into universal truth.
Other than that, the article is excellent.

My comment in the last entry about concern that TSA inspectors may leave stuff in my duffle bag vulnerable,  caused Steve, who is in the US Army and therefore travels often, to write that he leaves a note for the inspectors, along with repacking supplies such as tape, twine and zip ties.  He has found that they usually make an effort.  Once they even replied to his note.
This is so obvious, and so obviously good an idea that I am embarrassed I did not think of it.  Thanks, Steve.
———

Sailing Anarchy carries a link to one of the most dramatic sailing videos I have seen.  You can do remarkable things with millions of dollars.  The power of this Mono 60 is amazing, even though GANNET is far more cost efficient per knot.

Thomas sent me a link to a movie about a circumnavigation more than thirty years ago in an Alberg 30, JEAN DU SUD, by Yves Gelinas, for which I thank him.
I must admit that I skipped parts of it, which you will probably understand.  I am not a typical audience.  But I did find interesting the part after Yves was rolled and dismasted east of New Zealand.  He sailed back under an admirable jury rig.  Made an excellent repair to his mast.  And impressively restepped the mast by himself.
At times while watching I found myself thinking that all this seemed familiar.  Only afterwards did I recall that I met Yves Gelinas fifteen or twenty years ago while I was living in Boston and he gave me a copy of the movie then.
I must comment on the part of the film when Yves describes the difficulties of cooking underway, particularly in heavy weather.  I come across this often.  The solution is simple:  don’t.  Not only is the preparation hard, so is the clean up.  I don’t often say that my way is the right way, but I’ve sailed about as much as anybody and I’ve found the simplest solutions to most problems.  I don’t do more than boil water.  A cup or two for instant coffee in the morning.  Two cups for a freeze dry meal at night.  I can and have done that in Force Twelve.  No preparation beyond pouring the contents of a freeze dry meal into a big plastic measuring cup. Trying to pour boiling water into the narrow opening in the foil pouch freeze dry meals come in is an invitation to a scalding.  No clean up beyond on GANNET leaning from the companionway and dipping measuring cup and spoon in the ocean streaming by.
I note on the YouTube page that the film is described as “A Dutch sailor sails around the world in the 70s.”  Yves is Canadian and he completed the voyage in the early 80s.
And the only comment is:  “Those were the times…when you could afford it on a minimum budget and had absolute freedom.”
Imprecise minds.  Romantic fool.
GANNET cost $9,000.  Dan’s Medalist 32, COYOTE, which has crossed from San Diego to Tonga this year, $6,000, if I remember correctly.
And freedom in mid ocean is still absolute.
Most limitations are self-imposed.

When we went for a walk yesterday down to the lake, where visibility was about 100 yards/meters in fog, Carol could not decide what hat to wear and became the Mad Hatter.
Posted by Webb at 11:30 PM