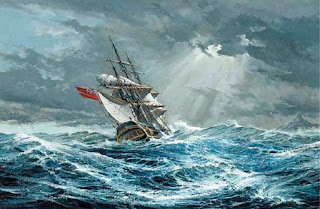 Cape Horn is full on this week with almost continuous gale force and above winds.  Here is a screen shot from Windfinder Pro for this coming Sunday with maximum gusts of 73 knots. It is also cold  there with temperatures dropping to well below freezing that night.  With rain.  Almost enough to give the place a bad reputation. 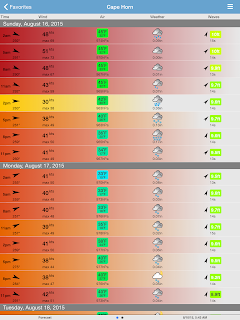 What I find particularly interesting is the wave heights.  They are difficult to read, but are no more than 10’/3 meters.  In those conditions I would have expected them to be higher.  On my first rounding of the Horn in solid Force 12, 64+ knots, the waves were twenty to thirty feet for a dozen hours.  In any event the waves are not predicted to be the monsters of hyperbole.  On Sunday Cape Horn will be terrible without exaggeration.

Capt. Bligh initially tried to reach Tahiti rounding Cape Horn from the east.  The lead image is a painting by Keith Alastair Griffin, H.M.S. BOUNTY REDUCING SAIL OFF CAPE HORN, which sold recently for $1400.
In the movie THE BOUNTY Captain Bligh is asked at the inquiry into his loss of the ship to mutineers how long he tried to beat around the cape before accepting that it was hopeless.
“Thirty days.”
“And how much westing did you make in those thirty days?”
“Eighty-nine miles.”
I’m not sure I have remembered the numbers precisely, but I’m close.
In researching THE BOUNTY online, I came across this:

A typo or someone geographically challenged.

A friend in England has just begun reading BLUE AT THE MIZZEN, the twentieth Aubrey/Maturin novel, and the last to be published before Patrick O’Brian died in 2000.  A twenty-first unfinished novel was published in 2004.  Bill is already feeling the loss and wondering what he will read next.
I am presently about a third of the way through TREASON’S HARBOUR, the ninth in the series.  Rationing myself to one Aubrey/Maturin a month, I’m good for another year.
Other fans of the series have told me of companion volumes, HARBOURS AND HIGH SEAS and A SEA OF WORDS, which I have mentioned here before.  I thank Jeff for sending me a link to a useful site that maps the voyages online.

Gilles Combrisson has shipped the carbon fiber pod, Harken traveler track and some other pieces I need to move GANNET’s mainsheet traveler to the cockpit sole.  The tracking number shows expected delivery Friday.  I’ll be glad to get them, both to see the pod and to try to figure out how to fit it and the pile of oddly shaped stuff now residing on the floor of a closet into a duffle bag.
A complication of moving the traveler is that GANNET’s backstay control lines run beneath deck to the traveler bridge.  I had been planning to run them up through the pod; but the other evening when I wasn’t thinking about it, the thought came that moving the backstay control back above deck will be simpler and eliminate clutter below deck as well as the hole in the deck through which the current backstay control runs and water inevitably leaks.
I need to be back aboard to be sure, but I’ve looked at photos of GANNET’s cockpit and see no reason why this won’t work.
Posted by Webb at 12:42 PM