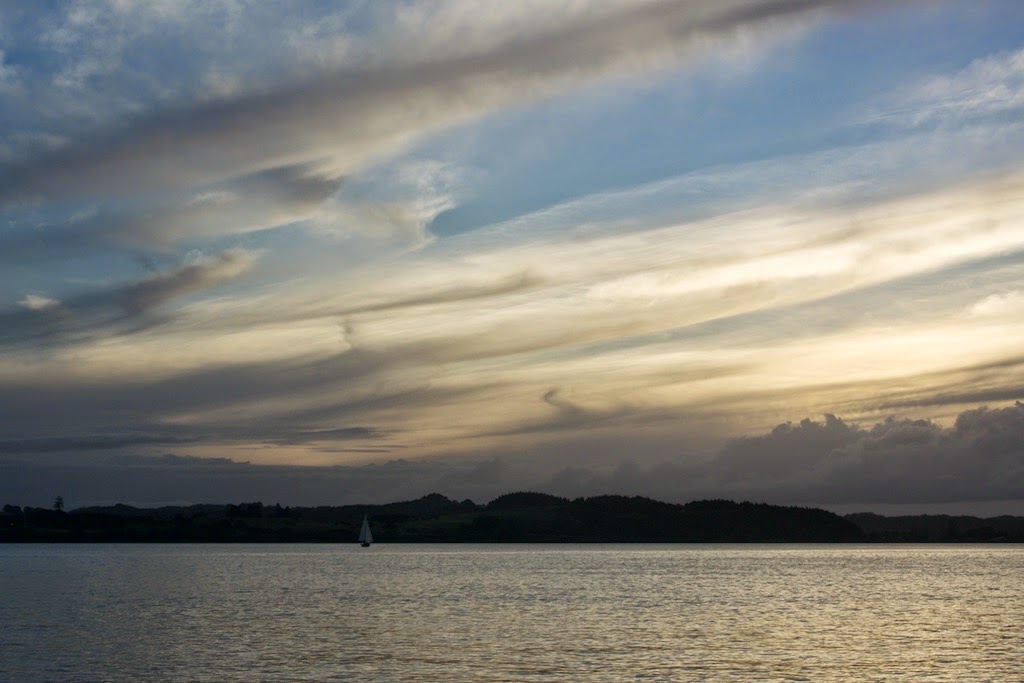 I was rescued this morning.
First light is shortly after 6:00 and I was awake a few minutes later but still in the v-berth when I heard and felt a power boat pass.  Several day trip boats stop at Russell and power boat wakes are unfortunately common, so I thought nothing of it until I heard the prop wash of backing engines close by and voices.  I crawled from sleeping bag and v-berth, slid open the companionway and stuck my head out to find a 40’ sport fishing boat’s stern a few feet from GANNET’s bow with two men on it, one of them reaching out with a boat hook trying to catch GANNET’s anchor rode.
With perplexity and some asperity, I asked, “What are you doing?”
They looked up with surprise.
“Oh, sorry.  Sorry.  We thought…adrift.  You see,” and they pointed down toward the rode, “Slack.  And not on a mooring.”  They gestured toward a headland a couple of hundred meters away.  “Sorry.”
“I appreciate your intentions, but I am anchored.”
“Sorry.  Sorry.”  And they powered away.

I drifted and sailed here yesterday, dropping the mooring at around 11:00 and riding the ebbing tide for the first mile or so, sails up but not drawing until we were well beyond the ferry crossing.  I experimented and found that sitting on one side of the cockpit using an oar as a paddle I increased our SOG by a half knot, from 1.8 to 2.3.  This wasn’t hard work, but I wouldn’t have been able to make headway against the current.
Cats-paws finally touched glassy water and GANNET began to sail, even making five and six knots, and I had the anchor down outside the Russell mooring field by 12:30.
I had not forgotten my relearned lesson and did not tow the Avon.  In fact I may deflate and stow it in the cockpit every night.  GANNET is the closest boat to the Customs dock which at this time of year is seldom used and has become the home of hundreds of sea gulls and terns, a few of whom have recently discovered GANNET’s dinghy and spend messy nights there.  Stowing it on the foredeck or deflated in the cockpit would put an end to this as well as the need to scrub growth off the bottom every week or so.  It only takes a minute to deflate and five or six minutes to inflate.
I pumped up the Avon and rowed ashore for a pleasant lunch at the Duke of Marlborough, New Zealand’s oldest licensed restaurant, of crisp salt and pepper calamari on a bed of greens and a glass of white wine.  I don’t usually drink before 5:00 p.m., but there are exceptions.  Followed by a fig and honey ice cream cone at a shop around the corner.
I then shopped for essential supplies, including Laphroaig and oatmeal, as well as other liquids and staples.  Russell has two small groceries, both larger and better stocked than the Opua General Store, and with much better prices.
I rowed back out to GANNET, had an air temperature gin and tonic with music on deck while watching a different view of the sunset.  This arm of the bay has widen to two miles between Russell and Pahia, giving a more expansive vista.
There was very little wind and I watched a small boat over on the Pahia side trying to get somewhere before dark.
Sitting at Central, I have only to lean forward, grab the edge of the companionway and pull myself up and I am standing outside surrounded by beauty.  How wonderful.  Interrupting my reading last evening, I did so and found a sliver of moon just above the silhouetted hills north of Pahia casting a thin gold thread across the water.
10:00 a.m. now.  Sunny and pleasant.  I’m waiting for wind to sail back to our mooring.  The tide has just changed and will be against us.  I could fit the Torqeedo and power, but won’t.  I must admit that I take greater satisfaction in moving under sail alone than using the outboard.
I’ve thrown away a few more things the past few days, including a hopelessly moldy wind scoop.  Of all the objects I could dispose of, the Torqeedo would make the most dramatic difference in stowage space.  Shaft, two batteries, tiller arm, spare propeller.
I certainly don’t need the Torqeedo here, except to get to the boat yard travel lift to haul-out which would be difficult in many combinations of wind and tide and impossible in some.  But I might need it elsewhere.  The problem is that the harbors of the world are configured with the expectation that boats have motors.  I don’t mind paying for tows, but I don’t like to ask for favors, and so am more independent having the Torqeedo than not.  But I do think about jettisoning  it.
Posted by Webb at 12:13 AM