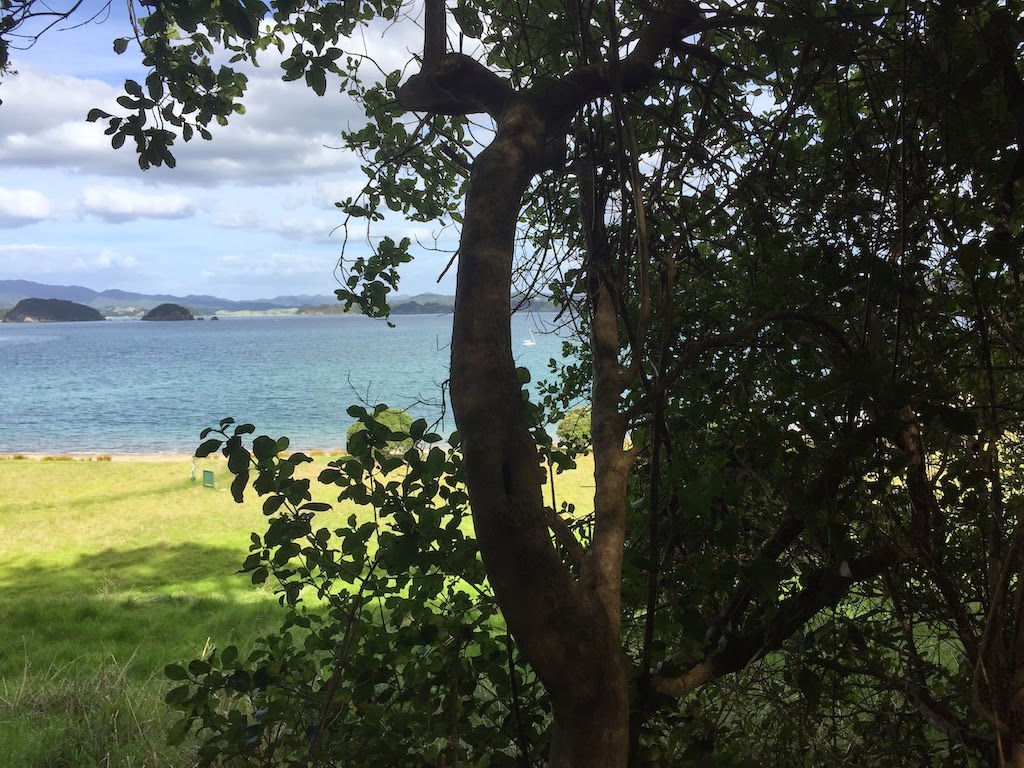 I dropped the mooring a little before 1100 on a sunny Thursday morning in very light south wind and rode it and the last hour of ebbing tide north.
I sail on and off the mooring and anchor under mainsail alone, but had the jib set within a few minutes when the wind shifted to the southwest as it came off Opua hill.  Until I get out into the open bay past Russell the wind gusts and drops, swirls and shifts as it comes off higher and lower land.  Between Opua and Pahia, a distance of four miles/6.5 kilometers, there are three steep hills and valleys affecting the wind.
The day was pleasant.  GANNET sailed mostly around three and four knots and I dropped anchor at what is known as The Lagoon at Roberton Island at 13:30, taking two and a half hours to cover what is 8.5 nautical miles for a stunning average of 3.4 knots.  And GANNET is a fast boat.
Three other boats, two sail, one power, were in the Lagoon, all anchored close to the shore.   The Lagoon is exposed to the southwest and south, with a two mile fetch in those directions to the mainland of New Zealand’s North Island, but the wind was so slight it did not matter.  Still, I anchored well away from the shore as I always do. 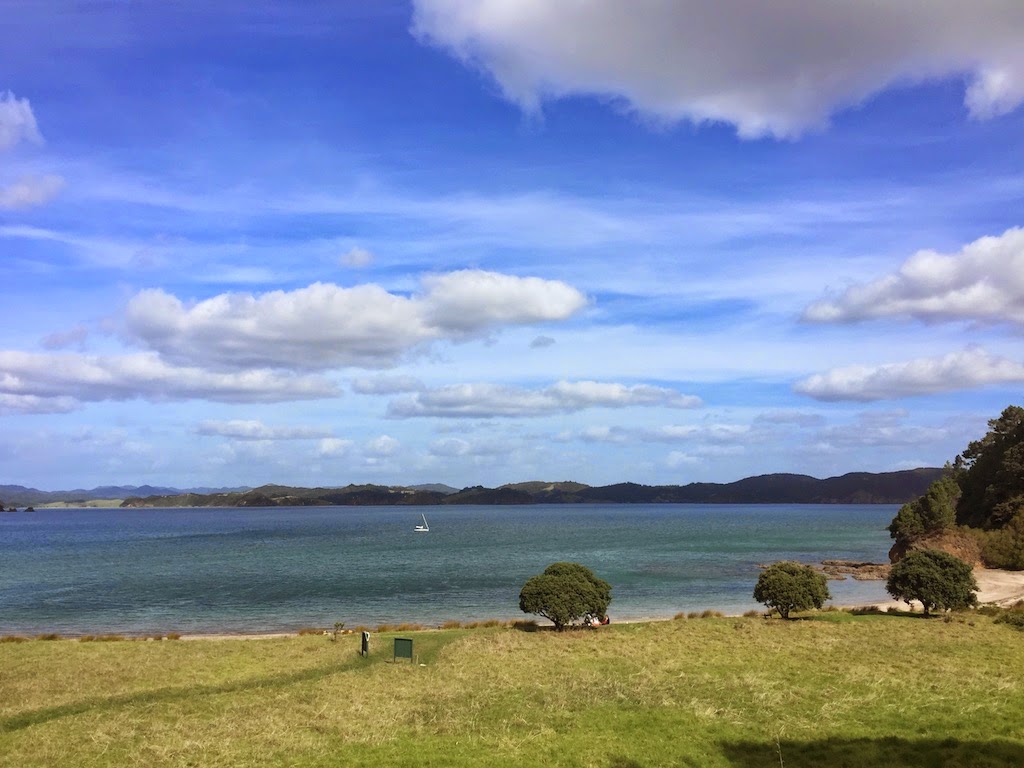 After sorting out GANNET I noticed that although I thought I had set the Yellowbrick to transmit positions every twenty minutes, it had done so every hour.  I reset the interval again.  Then  pumped up the Avon and rowed ashore, climbed the trail to the lookout, admired the beauty, watched a few boats moving about the islands, 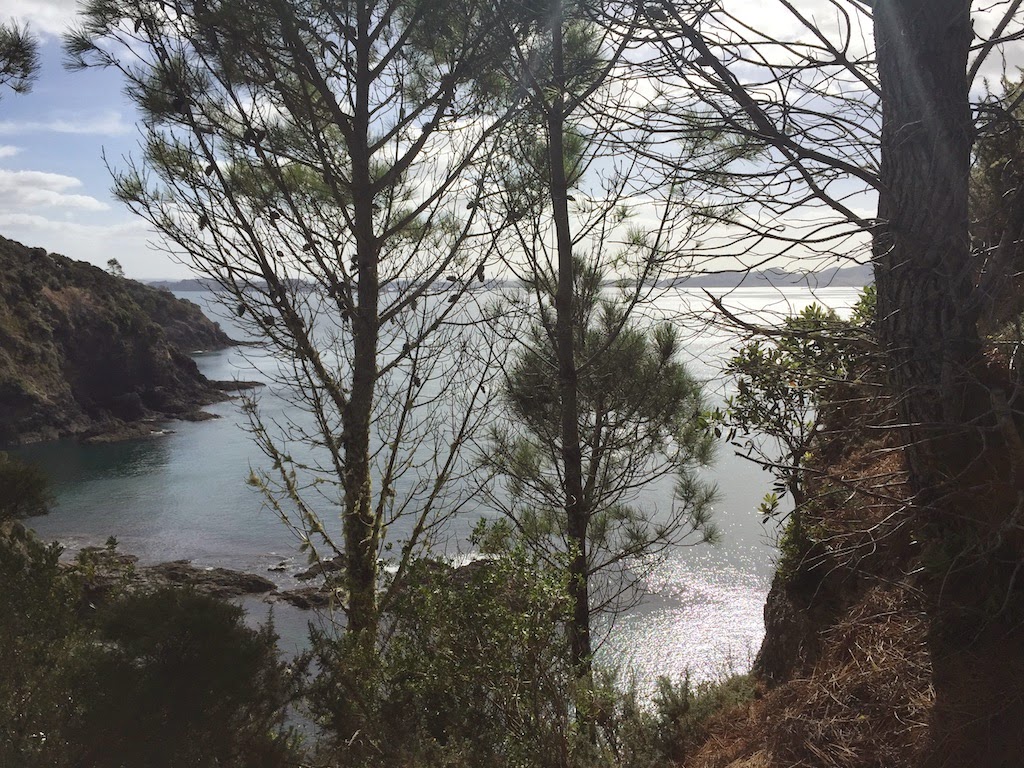 and took photographs, mostly with my iPhone whose easy panoramas I enjoy.

The other boats left while I was ashore, and three two person kayaks arrived and were pulled up on the beach.  Not long after I was back on GANNET, I watched them paddle away and thought for a while that I was going to have the anchorage to myself for the night.  Essentially I did.
While sitting on deck, listening to music and sipping wine, I watched two sailboats came in at last light, one a small catamaran about GANNET size, the other a 45’ sloop.  Both proceeded far past GANNET to anchor just off the beach.  I have wondered why people do that, especially since most have outboards on their dinghies, and surmise that most people on boats remain creatures of the land and have the illusion of safety there. 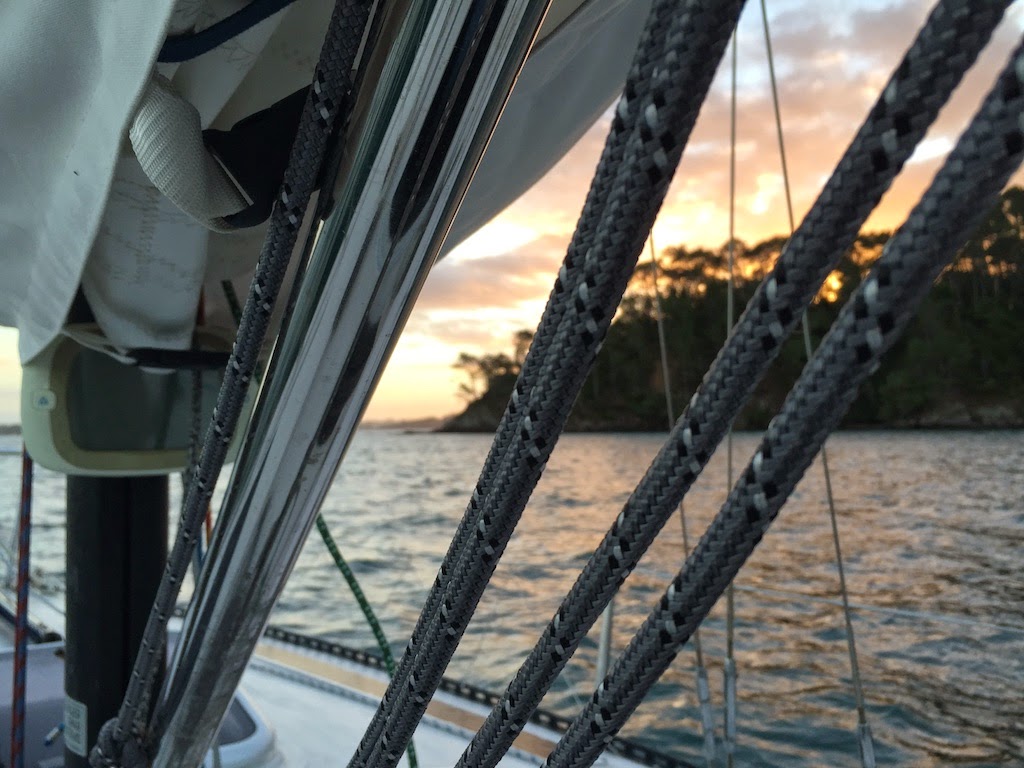 Just after sunset the wind died completely as I expected it would and, not having bothered to put the Torqeedo on the transom, I had to wait until 1100 the next morning for wind to return. 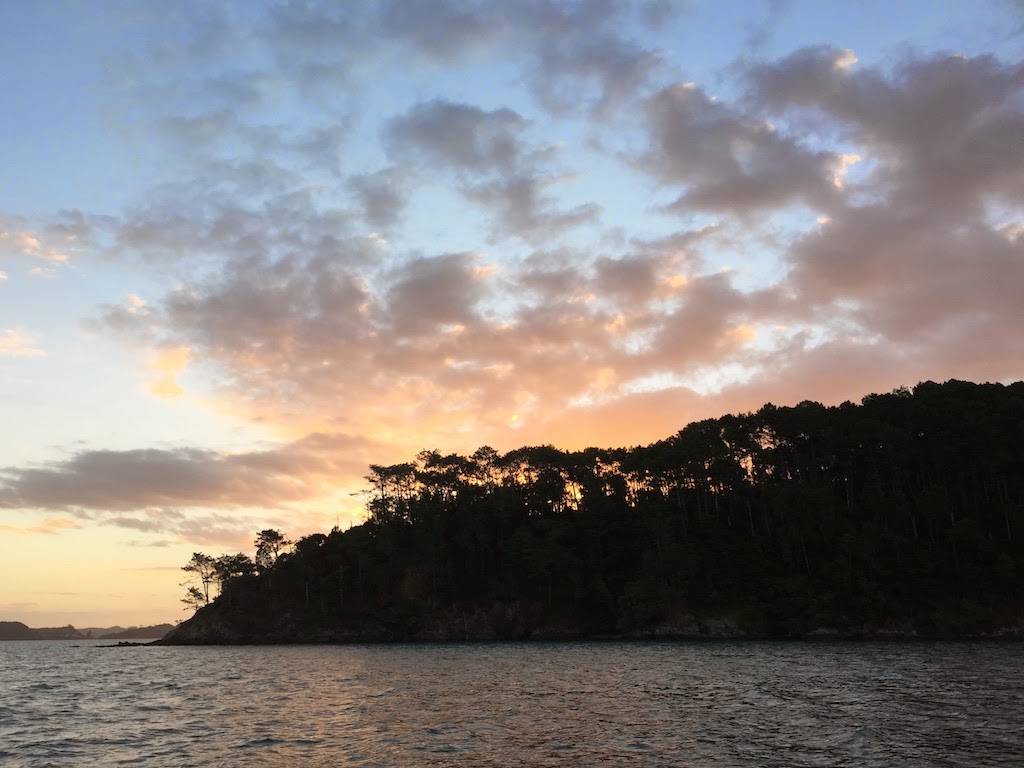 In a rare exception from my usual practice, I left the Avon inflated and towed it.  I thought I would sail to Russell four miles distant, anchor and row ashore for lunch.  However the wind fulfilled the ‘light and variable’ forecast, often dying completely, leaving GANNET motionless on a silver and glassy bay.  When wind returned it headed us.  The dragging Avon slowed our progress and made loud gurgling sounds, while GANNET made her way through the water almost soundlessly.
Noon passed and we weren’t even to Tapeka Point a mile north of Russell.  I gave up on lunch ashore and ate a protein bar.
Finally we made the turn south and passed Russell at 13:30.
The forecast of several fine days had changed and today, Saturday, was accurately predicted to be intermittently rainy and windy, so I kept on sailing and was back on the mooring at 14:30 for an average speed of 2.4 knots.  I repeat:  GANNET is a fast boat.  And in fact we were about the only boat sailing, both the fastest and slowest on the water.
I checked the Yellowbrick tracking page and saw that on the return it did transmit positions every twenty minutes, a more useful interval for a daysail track.


The three day forecast now is for two lows and two highs to pass over the country.
Posted by Webb at 12:44 AM