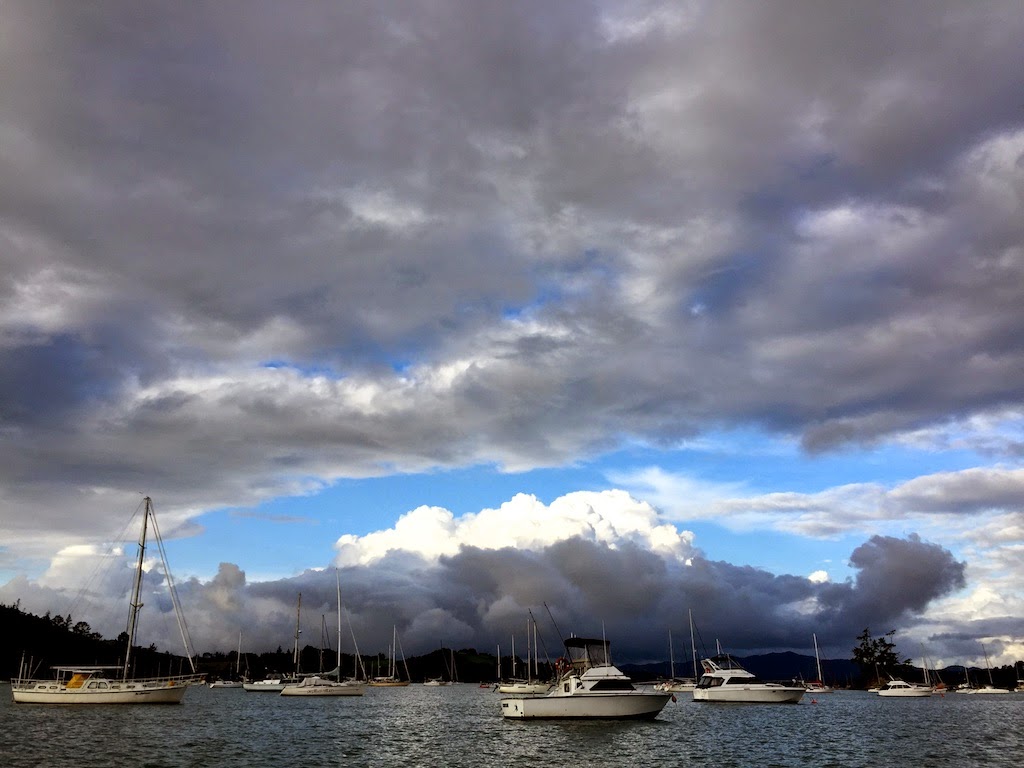 The Boston Marathon was run last Monday in conditions that the NEW YORK TIMES described as “cold and wet”.  There was some headwind.  The winning times were ordinary.  Which makes the achievement of my friend, Tim, all the more remarkable.
Some of you will remember that I have written about Tim before, most recently when he executed what may well be a double unique in the history of our species by running a full marathon one morning and playing violin in a symphony orchestra that evening.
Last Monday in those unfavorable conditions Tim ran a personal best in the Boston Marathon.  I trust that he will not mind that I let you know he did this at age 50.
To me this is not only a personal best, but the very best kind of competition:  against yourself and time and chance and limits.
Congratulations, Tim.  And admiration.

———
While Tim is setting personal records for running fast, GANNET and I continue to set records for sailing slow.
Slight wind came off the hills beyond Russell at 1100 Wednesday and I had the anchor up and was underway, if one can call it that, by 1115.
I carry a bucket that I fill with water and a brush with me to the foredeck when I raise anchor.  Russell has a mud bottom and on THE HAWKE OF TUONELA I often had to scrub the last thirty or forty feet of chain link by link as it came up.  But except for a little mud in the crevices of the Spade anchor, anchor and rode came up clean.  I have yet to raise GANNET’s anchor in strong winds, but small anchors are one of the great advantages of small boats.  Raising GANNET’s ten pound aluminum Spade is so easy.
The day was lovely.  Except for power boat wakes, the bay smooth.  It took us three hours to sail four miles back to the mooring which I picked up on the second attempt at 1415.  The first time I ran forward with boat hook in hand and couldn’t find the float before current pushed us away.  Gybe.  Circle.  Repeat.  Success.
The anchor and rode in its deployment bag have been stowed along with the Torqeedo shaft and one battery, and a lot of other stuff—buckets, hand bilge pump, dinghy inflation foot pump, plastic bowl that serves as the galley sink, dust pan and brush, solar shower bag, two two-part oars, tool bag—in the space directly below the cockpit and between the aft halves of the pipe berths.
I could not get to the anchor quickly there.   As I have noted, stowage on GANNET is like a puzzle of interlocking pieces in which to get to one you usually have to move several others in the correct sequence.   When I have known I will anchor, I have moved anchor and rode deployment bag from beneath the cockpit to the v-berth where I rest them on one of the expensively made and failed companionway curtains directly below the forward hatch.  It is much easier to pull anchor and rode through that hatch than to lift them out the companionway and carry them forward.
While I was straightening up GANNET after our return Wednesday afternoon I removed everything stowed between the pipe berths and scrubbed the space clean.
I returned the Torqeedo shaft and battery, but moved the Jordan drogue from the bow and stowed it beside the Torqeedo instead of the anchor and rode deployment bag.  The drogue in its deployment bag is a soft cylinder about five feet long and 10” in diameter.  More giving than the anchor.
I now stow the Spade anchor and rode in the bow, forward of the partial bulkhead at the forward end of the v-berth.
I have hesitated to do this before because of concerns that it might start banging against the hull when GANNET becomes airborne off waves in strong wind.  But hopefully I have it well padded with a life jacket, the rode, a second anchor rode, and the tarp I occasionally use as a cockpit sunshade.  Weight in the bow is not desirable; but weight anywhere on GANNET is not desirable; and I have to carry some.
The anchor is now much more quickly accessible; and stowage, both in the bow and between the pipe berths, better organized.
Of course, it would be better still if the Torqeedo weren’t there.

I poured myself an air temperature gin and tonic at about five last evening, stood in the companionway and found myself confronted by a billowing explosion of cloud to the east.
The clouds continued to roil ever higher and grow ever darker.   All moving this way.  And then the whole mass just evaporated.  In ten minutes the sky was mostly clear, and I stood in the companionway and enjoyed my drink at leisure.
———

However, our weather has changed.
Today we’ve had some wind and rain and GANNET is caught in the rebound of small waves off the marina breakwater and bouncing up and down and around.
Gale warning for Monday.
Posted by Webb at 10:59 PM