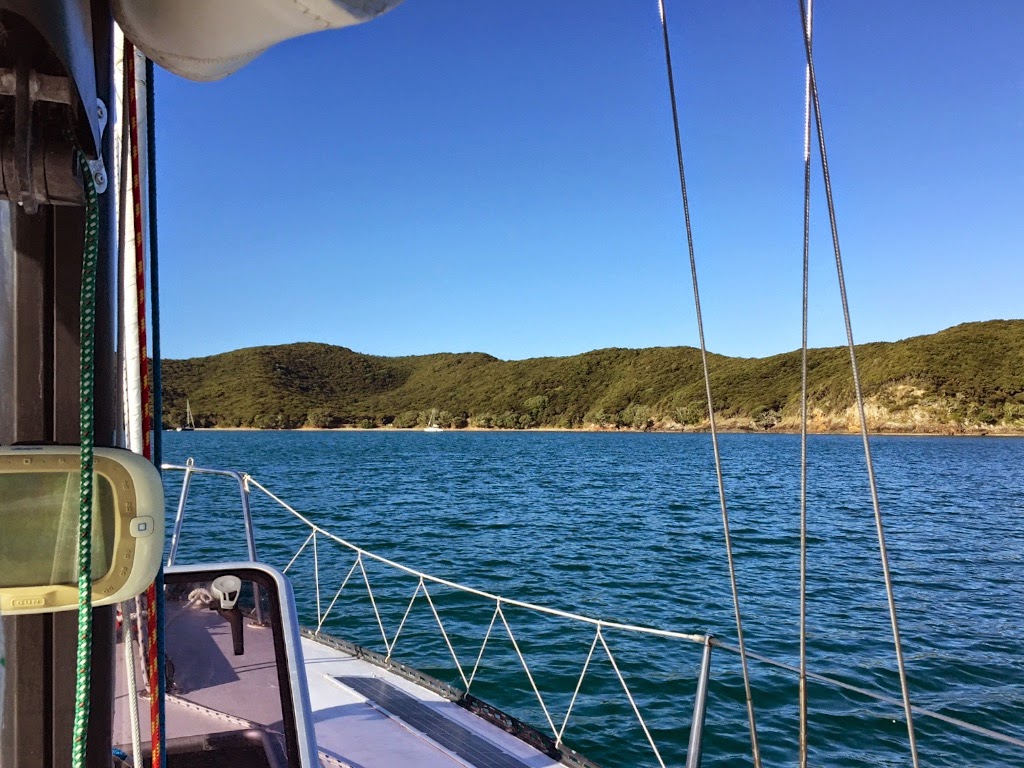 I sailed off the mooring under mainsail at 1130 on Wednesday with an ebbing tide and light wind from the southwest.
The Torqeedo was in place on the outboard bracket, but tilted out of the water.  I thought that if the wind died completely, I would use it to reach an anchorage, but didn’t need to.  The dinghy was deflated and stowed in the aft end of the cockpit.  As it happened, I didn’t need it either.
Spinning GANNET in a half circle, I unfurled the jib and she began gurgling along at three knots.  I hand steered past the ferry crossing, then engaged the new Raymarine.  I have yet to complete the wiring of the test tiller pilot.
It was very pleasant, if not exciting.  Light wind, sunny day, temperature in the 70sF/low 20sC.  I wanted pleasant, not exciting.
After an hour, when GANNET was off Russell, a sea breeze reached us from the northeast and we went from a broad reach to close hauled.  A better wind angle in light air and the little sloop began to make five and six knots, matching the wind speed.  We also began passing other, bigger boats who weren’t.
The glorious weather all week, combined with long New Zealand Easter holidays, made for an unusual number of boats on the water and anchorages more crowded than usual.  Most of the boats, even those with masts, were under power.
Looking at the Yellowbrick track now I see that one hour intervals are too long for a daysail.  We sailed almost to Moturoa Island before tacking to the east and Te Rawhiti Inlet.  And then as the wind in the inlet veered, slow tacked up it in smooth water, passing the Lagoon at Roberton Island which was too crowded, and two bigger boats that to their credit were trying to sail.  GANNET is a jewel.
I knew there would be room at Paradise Bay on Urupukapuka Island, which can probably hold a hundred boats and where I always anchor much farther out than anyone else.  And there was.  Only three boats, all anchored right off the small beach.
My desire to have everything ready in advance in this case caused me to make an error in judgement and furl the jib a half mile from where I wanted to anchor.  Once I had done that I placed the anchor rode bag and the anchor at the bow and couldn’t easily unfurl the jib again without moving them.  It took me a half hour, tacking slowly under mainsail alone in ever weakening wind to cover that last half mile and go forward and let go the Spade anchor in 20’/6 meters of water.
All but 20’ of GANNET’s rode is line.  All chain is better, but she can’t carry the weight.  So I need to veer more scope and she needs more room in which to swing.  In that light wind, I snubbed the rode first at 60’/18 meters to set the anchor, then slowly let out another 60’ and cleated it.  GANNET being light and low profile is easy on anchors.  There didn’t seem any chance of more wind that night; and if there was, it would wake me and I could let out more rode. 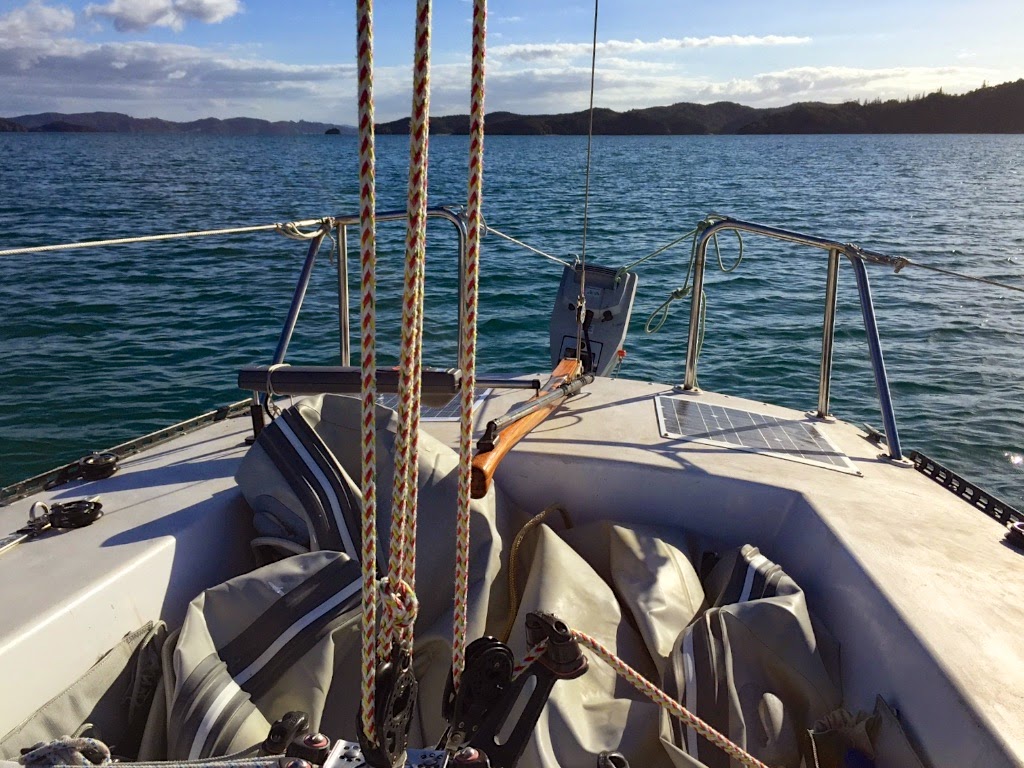 Paradise Bay is protected from the east; but the reason I like being there is the open view to the west in late afternoon and evening.  Ashore there is only a small beach surrounded by impenetrable bush.  The bush has been cleared above another cove just to the north and you can land there and walk up to the crest.  I never have.  Perhaps I should.
The anchor went down at 1600 hours.  Five hours to sail a route of thirteen miles, though tacking we had sailed farther.
I poured myself an iceless gin and tonic, sat on deck, listened to music, and watched the sunset behind islands and later the moon rise over Urupukapuka. 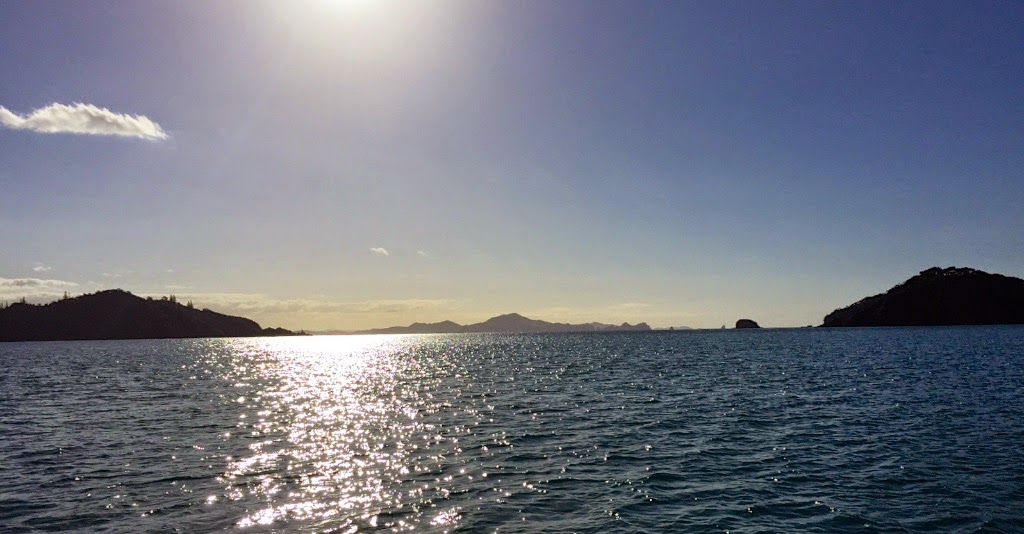 The anchor came up clean Thursday morning with just a few pieces of weed wrapped around the line.  There was a little more wind than the day before, but it was easy to pull GANNET hand over hand up to the anchor and no strain on my left shoulder.  With lots of room around me, I gybed the mainsail, engaged the tiller pilot, returned the rode to its deployment bag and lowered both bag and anchor through the forward hatch onto one of the failed plastic curtains I had made for around the companionway.  At least I had found some use for them in keeping the v-berth clean.
I didn’t have a plan or a destination.
I let the tiller pilot steer as we headed north between islands.  Once we emerged from Urupukapuka’s lee, the wind increased by a knot or two, perhaps to as much as seven knots; and I let GANNET continue north at six and seven knots on a beam reach until we were almost to Cape Wiwiki. 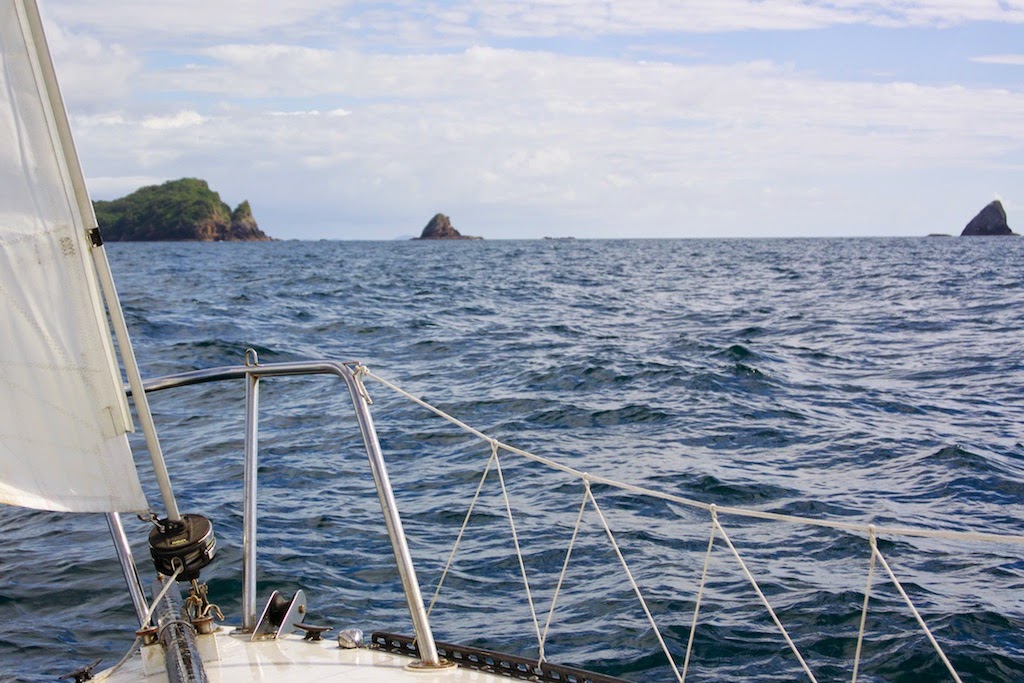 There were wavelets in the open bay.  GANNET even took some spray over the bow from one or two.
I gybed farther north than the Yellowbrick track shows and turned us southwest, thinking I might check out Roberton again, or maybe anchor off Russell.
We were on a broad reach.  Conditions were perfect for the asymmetrical, but I wasn’t that ambitious and just sat on deck in my Sportaseat and enjoyed the sunshine and the sail.
In the middle of the bay we passed a small open aluminum power boat that New Zealanders call ‘tinnies’ with a man about my age fishing.  I had the depthsounder on and was impressed that he was anchored in 115’/35 meters of water.
We were within easy speaking distance.
He called over to ask what my boat is.
I told him.
He said, “Pretty boat.”
A little further on we almost ran down some gannets.  I didn’t see them behind the jib until they took flight when we were within a few feet.  Perhaps they thought big sister was coming to join them.  By the time I ducked below and grabbed a camera they were distant.

I thought about turning for Roberton, but I didn’t do anything.  I thought about anchoring at Russell and rowing ashore for an ice cream cone, but I didn’t do anything except trim the sails as the wind deflected off the hills.
I did decide that I really should use the Torqeedo as we neared Opua, so I lowered it into the water and attached the tiller handle, lowered and furled the mainsail, furled the jib just north of the ferry crossing and powered back to our mooring, which I picked up at 1430.
I saw another gannet high in the air near Russell.
I learned that neither of my Torqeedo batteries will any longer take a full change.  One stops at 89%.  One 81%.  They are supposed to have a five year life.  One is four years old.  One three.  I never use more than about 10% anyway.
I look up often at the masthead tell tail.  It is good to know that the new one is telling me the truth.
My shoulder held up well except for one painful jolt it took when the mainsail collapsed and filled on a power boat wake.
I had a good time.
Posted by Webb at 1:46 AM