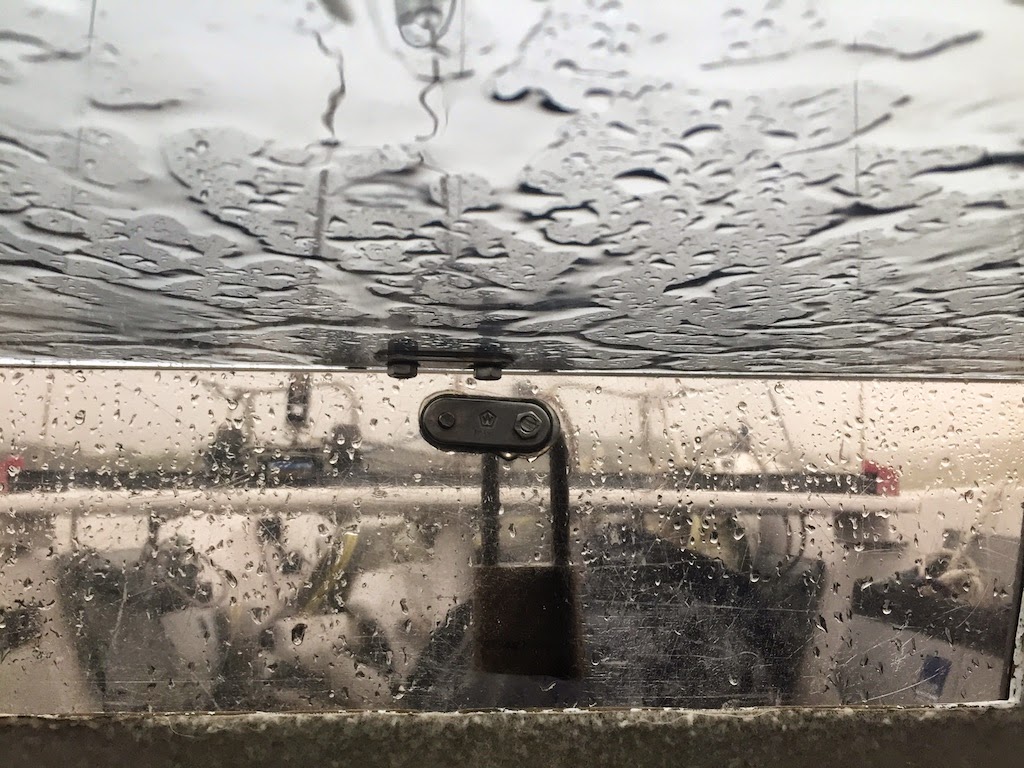 An unexpected lull in the storm that arrived precisely as forecast last night and covers most of the country with rain and gusty wind.  Gale force off Cape Brett.  Hurricane force at Wellington.  Only gusting in the twenties here at Opua, I think, but enough for GANNET to imitate her eponymous bird, soaring and diving around the mooring.
This has been the sternest test yet of my rebedded forward hatch.  No leaks.  However, there is a leak around the deck plate on the starboard lower shroud which drips onto the small counter top beside Central.
The storm is forecast to peak this afternoon—it is now almost 1:00 p.m.—and ease tonight.  There is a increasing patch of blue sky to the north and west, and the sun has just cast the first shadows of the day.  Much of the morning was so dark we had no solar charging.
I prepared for the storm yesterday by pulling the Avon into the cockpit and deflating it, removing the U.S. and New Zealand flags from the rigging because they shake the entire boat flogging in strong wind, tightening the backstay, and buying a bottle of wine, bread, cheese and chorizo salami at the General Store yesterday.  I’m good for the duration.
Patter of rain on deck.  Blue sky appearing to the south through the companionway.
Maybe I’ll get ashore tomorrow.

Yesterday afternoon I continued my inspection of GANNET’s interior.
I removed everything from the port pipe berth and slithered aft to return the storm jib with its new luff  tape to where it is stowed beneath the spare anchor, a 15 pound Delta.  Four fenders and the PortaPotti also live back there.   I’m throwing out and replacing two of the fenders which are beyond salvaging.
I could see the entire stern space.  On the starboard side are the spare rudder and two trash bags of freeze dry food, thirty meals to a bag.  These are the last of the five bags I stowed before leaving San Diego.  New Zealand’s Back Country Cuisine is one of my favorite brands of freeze dry meals.  I’ll restock when I next return.
Slithering back into The Great Cabin, I returned the new Avon and other items stowed on the port pipe berth and crawled forward onto the v-berth, where I went through the various water resistant and water proof bags there.  As I expected by moving the second Torqeedo battery and the sextant from one bag, I managed to combine the contents of two bags into one and eliminate the other.  A modest triumph.  For whatever reasons, I do take pleasure in getting rid of things.
The second Torqeedo battery is now stowed aft.  The sextant I will carry back to Evanston with me.
I also checked the small stowage areas beneath the v-berth and found forgotten ‘good’ plastic wine glasses that Carol and I bought at the Milwaukee Art Museum.  Lighter and more stylish than my everyday plastic.  I drank from one last evening and will again this.
The sun is becoming warm shining through the forward hatch onto my back.
Posted by Webb at 9:35 PM