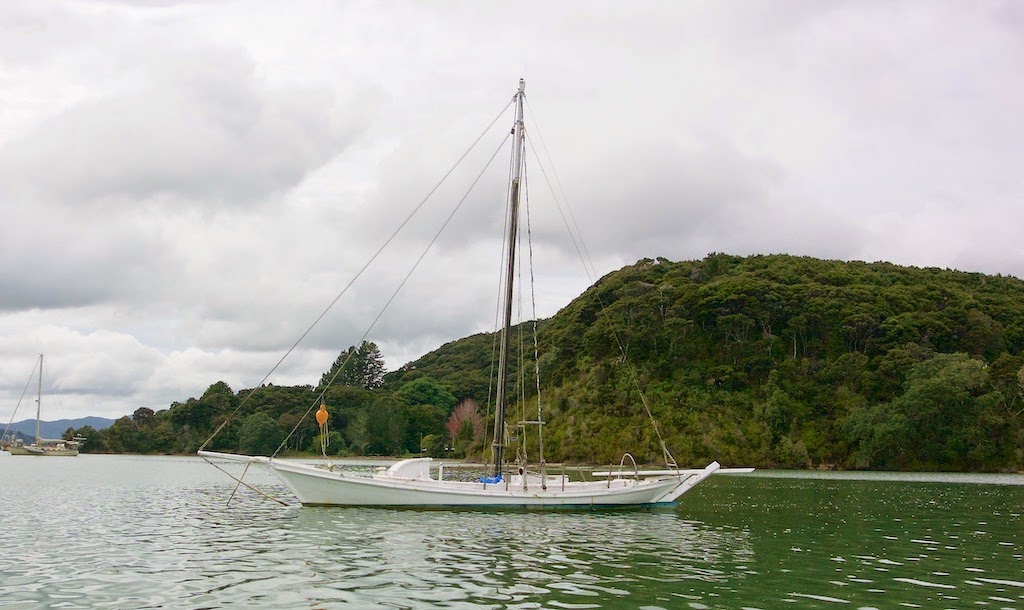 A gust of wind heels GANNET at her mooring.  Not strong wind.  Fifteen knots.  But GANNET is a light boat and it doesn’t take much.
This is my second successive day not going ashore.  A front is passing through today with occasional rain.  I could have rowed in easily an hour ago, and could make it now though less easily; but there is no need.
Yesterday was also overcast, but with little wind.
I scrubbed GANNET’s waterline from the dinghy, hanging onto the gunnel with my bad arm and scrubbing with my good.  GANNET’s low freeboard makes hanging on easier than it was on THE HAWKE OF TUONELA.  And there is nine feet less waterline to scrub on each side.
I had paid Mike to dive and scrub the bottom just before I returned to GANNET, and although her antifouling is now more than a year and an ocean old, I found only a little weed and slime.  No hard growth.
This antifouling is International’s Ultra, a hard antifouling I have not used before.  For many years I used ablative paints that wear away.  I like being able to scrub the Ultra vigorously and will apply it again when I next anti-foul later this year or early next.   The disadvantage of hard antifouling is eventual build-up.  Not going to be my problem.  Maybe for GANNET’s next owner.
My left shoulder held up well to holding on,  so I decided to take advantage of the calm conditions to row out and circumnavigate Pine Tree Island which is in serious need of repair.
Long time readers may recall the story that early last century a local settler planted seven pine trees on the island, one for each of his children.  For years those pine trees have been all that holds the island together.  Roots of two of the trees have become extensively exposed.  Erosion from a few more storms may see them fall.  Pine Tree Island is doomed. 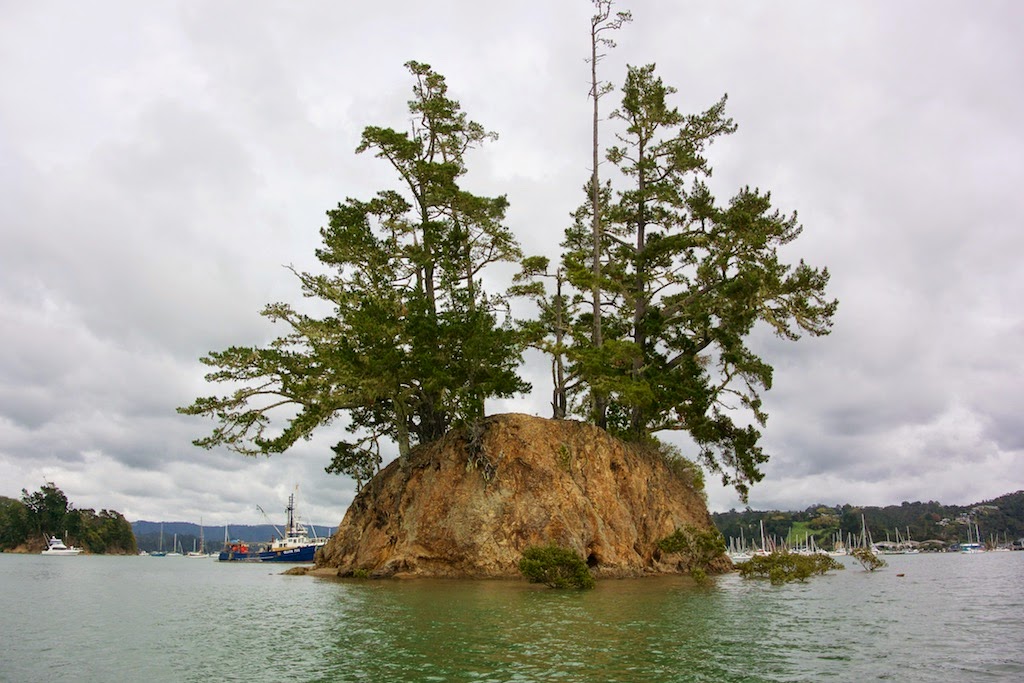 On my row I stopped and talked for a while with Gary of MASON BAY.
He pointed out that the boat in the lead photograph, named I believe, LITTLE BOAT, circumnavigated the world back in the 70s or 80s from California.  She started with a crew of one and ended with two and a half.  The sailor met a woman in Australia who completed the audacious voyage with him and became pregnant.
LITTLE BOAT is smaller than GANNET.  More CHIDIOCK TICHBORNE size, though she does have a lid.
I’m not sure how she got to New Zealand after her circumnavigation.  She, like Pine Tree Island, is in need of repair.
On my way back to GANNET I made my way to where my old mooring was.  Easy to locate because two other boats that were on nearby moorings when I had HAWKE are still there.  Alas, THE HAWKE OF TUONELA’s mooring is not.  After I sold it back to the marina they decommissioned it.
After the exercise my shoulder ached some, but not much more than usual.
Posted by Webb at 9:26 PM