That was easier than I expected.  And how many times can you say that about working on your boat?

For three to four months Hilton Head Island is hotter than Hades.  For the other eight or nine months it is a legitimate version of paradise.  This year Ian flipped the switch.  Since he passed here all but unnoticed the weather has been perfect, and as you can see from the above forecast is expected to continue to be indefinitely.  Not, however, perfect for sailing.  Only single digit winds and while I would like to go sailing, I don't want to drift with the tides.  So  I have begun replacing the broken port pipe berth track.

Yesterday I went down to GANNET and removed the berth fabric.  This requires removing a short track that is bolted through the partial bulkhead at the head of the berth and then unlacing a continuous line that secures the fabric on the underside.  This must be done in cramped, awkward, uncomfortable positions reaching into blind spaces.  I had forgotten what contortions are necessary when working inside the little boat.

The instant I had loosened the fabric I saw that I am going to have to paint the area under it before putting it back in place.  I knew the interior needed repainting after in ignorance I used the wrong kind of Rustoleum to paint it the last time.  I did not know then that Rustoleum makes a specific line of marine paint and so used what I found on the shelves at Home Depot.

Today I drilled out the too numerous rivets holding the old track in place.  I was not looking forward to this, but as noted it went easier than I expected, although again requiring me to squeeze this old body into unseemly positions.

Drilling rivets of course left the cabin filled with tiny specks of aluminum waiting to imbed themselves in my skin.  I swept them up with a hand boom and a dust pan, then squirmed aft again with a putty knife and chipped paint.  Then swept all the debris up again.

Tomorrow I will cut the new track to the required 7' length, fill rivet holes, and chip more paint.

The interior is not in complete chaos, but it is a mess.  To clear space I have had to move things back into the stern, onto the starboard pipe berth, and onto the v-berth.

I like working on GANNET when the work goes well and when the interior is not an oven.  So far the work is going well.

I can write prose any time, and do.  Poems write themselves and one may have done so last evening while I was reading a fine and thought-provoking novel, THOUSAND CRANES, by Yasunari Kawabata, who won the Nobel Prize for Literature, but then so did Bod Dylan.

While poems write themselves--and none has for me in six years--I do revise them and I am still moving these words around, but I think this is pretty much it.  Whether it is a poem I have not yet decided. 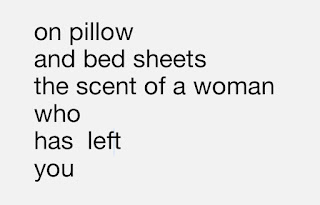 Thank you. I decided I like it well enough to upload to the poems page of the main site.

If I change my mind, I can always take it down.

In a slight twist on the relationship implied in your poem:
My wife "smells her mother" every time she opens another box of inherited clothing. She has to go thru this scent-laden stuff do decide what little to save vs. the much to discard. The aroma gets very much in the way of her task.
The sense of smell -- for me and for many, the most-neglected sense -- links to powerful memories and emotions.

Thanks as usual mr chiles, but did I detect disdain for mr Dylan, as non deserving a Nobel? On quantity alone he deserves chocolates, and mostly ok on quality?!
His
“You’ve thrown the biggest fear that’s ever been hurled,
The fear to bring children into the world”.
Really moves me, not you?
Thanks for detail on interior paint types, I’ve been putting my interior off too long and this maybe the spur I need.
Cheers tedd downunder