Even with rapid intensification of tropical storms becoming more common, Typhoon Chanthu near the Philippines is extreme.  In 48 hours it went from a 30mph/26 knot tropical depression to a 160 mph/139 knot Category 5 typhoon.  Only five other storms have ever intensified this quickly.

Tropical storm Mindy became the third this year to pass over Hilton Head Island.  Fortunately all were only tropical storms when they did.

I was interested to learn how much rain Mindy dropped on the island.  Inexplicably the page of National Weather Service at Hilton Head Airport does not show rainfall.  However, I found this from nearby Beaufort. 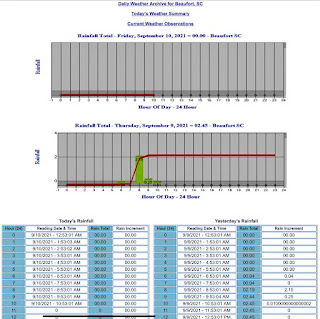 Meanwhile Hurricane Larry’s core is turning from hot to cold—don’t ask me to explain because I can’t—and is going to bring heavy snow to Greenland and a gale to Iceland.
https://www.cnn.com/2021/09/10/weather/hurricane-larry-forecast-weekend-snow-greenland/index.html
This world is a very strange place and becoming stranger.
Posted by Webb at 1:47 PM