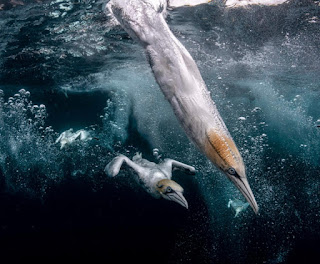 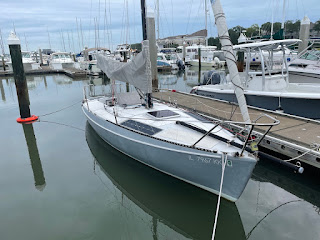 I biked to GANNET this morning before breakfast and found her as in the lower photo which was taken before I hosed her off.  Only one bird dropping on the deck and few on the dock, although I did cause a nearby snowy egret to take flight. The interior is musty and needs to be wiped down and aired out on a sunny day, none of which are in prospect. Only a few drops of water in the bilge easily removed by a single paper towel.

I inventoried my freeze dry meals and found I have 27, although several of them make two dinners for me.  I’ll order more today, but I am already pretty much set to be self-sufficient for almost two months, by which time I expect you people to have restored some basic services.

Unfortunately as I already knew from the view from the condo, the damn ferry boat is still there.

The superior photo I put first is of gannets seeking dinner off Scotland’s Shetland Islands.

My GANNET never looked that fierce, but then she has never been that hungry.