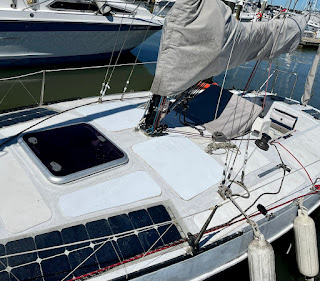 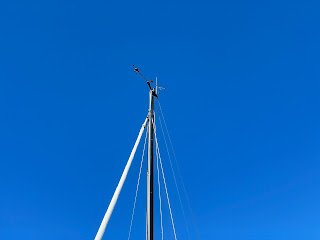 I biked to GANNET at 8 am and replaced the three Raptor nonskid pads that had been damaged by a negligent rigger in Panama.  The process left me very impressed with the adhesive Raptor uses.  It was suggested that a multitool would have made this easy.  I do not have one and am reluctant to buy a tool that I will seldom use again, so I used my hands and a putty knife driven under the edges of the damaged pads with a hammer.  Removing the old pads took about an hour and a patch of skin on the palm of my right hand.  Cutting and fitting the new pads took ten minutes.  You can see the color difference.  The new ones are whiter but not glaringly so.  They are the two closest to the mast and the one on the port side of the forward hatch.

While I was working the riggers came.  Someone in their office was supposed to call me but hadn’t.  It was fortunate I was there.  They installed the new Windex and the new Raymarine masthead wind instrument.  I think these are the fourth of each to go on GANNET’s mast and hopefully will be good until I put her masthead in the water again which, even more hopefully, will be never.

I wrote to a few friends that I have checked two tasks off my to do list.  However when I looked at it I checked off three.  The Raymarine and the Windex were listed separately.  A glorious day indeed.

An article today at Ars Technica reports the results of a genomic analysis that purports to trace and time more accurately than has been done previously the Polynesian settlement of the South Pacific.  The article itself is rather dry.  The essence is in this chart. 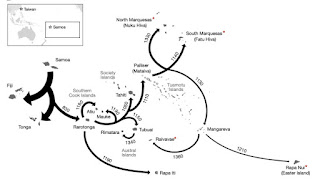 As a sailor who has crossed that ocean many times I have long been impressed by those early Polynesian voyages.  Big stretches of empty ocean and mostly small targets.  That the voyages were made once could have happened by chance.  But, and this is what I find most impressive, they were repeated and if you know anything about the winds in the South Pacific, they were mostly to windward.  Only the broad line from Samoa to Fiji is partially with rather than against the trade winds.
New Zealand does not appear on the chart.  While it is a big target, the voyage from the tropical islands to there is across wind patterns and it is my experience that you are likely to encounter severe weather as you approach New Zealand.
They were sailors.  I like to believe I am their equal.
I have no higher praise.
Here is a link to the article:
https://arstechnica.com/science/2021/09/new-genomic-analysis-sorts-out-when-polynesians-reached-which-islands/
From time to time I am asked about freeze dry food, so here is an order I just put in with LPD Camping Foods. 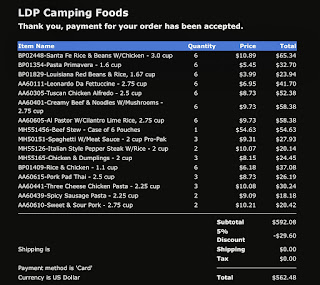 While if my addition is correct there are 73 pouches, they contain at least 111 meals because many of them are two meals for me.

All of the AlpineAire are two meals.  So are the BP Santa Fe Rice and Beans and Chicken and the MH Spaghetti, Pepper Steak, and Chicken with Dumplings.  Some of the others might be stretched too.  300 calories is a meal for me, any pouch with over 600 calories counts as two.  That might not be enough for others.

I always advise testing before you buy in quantity though occasionally I have not done that.  Some freeze dry food tastes terrible or like nothing and some is too spicy or salty for a passage made on a boat with a limited supply of fresh water.

This order works out at $5.06 per evening meal.  About $150 a month.  Add oatmeal and trail mix for breakfast, cans of fish and chicken and Laughing Cow cheese and crackers for lunch, and a few snacks, plus of course wine and spirits, and life at sea is less expensive than on land, until something breaks.

If you haven’t already, David Lewis has written a detailed account of the traditional navigation of the pacific, called ‘We, the navigators’. His other books are also worthy, Ice Bird in particular.

A good suggestion, Justin. I read David Lewis many years ago.