Not all world records are equal.

I recently read of one that is not, that I think should not even be considered.  But then people do want attention.

A young Brit whose name I do not include but which you can find in the linked article has set the praiseworthy record for drinking in the most pubs in twenty-four hours.  He drank in 67 different pubs in his home city of Brighton, England, in that period of time.  I doubt I have been in 67 bars in my long life.  He did confess that he did not drink alcoholic beverages in all the pubs and that he made frequent use of the men's rooms.

I just finished reading SLOUCHING TOWARDS UTOPIA by the economist, J. Bradford DeLong.  This is not my normal reading, but I happened across a review of the book and decided to buy the Kindle edition.  DeLong's grand narrative--his phrase--is that the years 1870-2010 constitute the 'long 20th Century'--during which there were two thirty year periods when our species made unparalleled material progress.  The century ended in 2010 with the Great Recession for various reasons, including the loss of the world's trust in United States leadership.  Some of the economics in the book are beyond me, but I know the history of those years fairly well.  I am apparently one of the few still living who know when WW2 happened and that it did not start in 1941 as most Americans who have any idea believe or in 1939 as the few Europeans who have a clue believe, but in 1937 when Japan invaded China.  And I agree with DeLong's observations about history and individuals.

Here is a quote that I find interesting because I don't think I act this way.

In a well-functioning market economy you began nearly every meeting you have with a stranger thinking that this person might become a counterpart in some form of win-win economic, social, or cultural exchange.

I do not believe I seek personal gain from people I meet.  I mostly just want them to be reasonably courteous and not cause me any grief.

And here is a quote with which I completely agree.

It is a hard problem, how to conduct rational public discourse in a twenty-first century in which communications channels such as Facebook and Twitter are run by those whose business model it is to scare and outrage their readers in order to glue their eyeballs to a screen so they can then be sold fake diabetes cures and cryptocurrencies.

Dirtbag is not a word I normally encounter, yet I have twice from readers in the past week.  Neither was directed at me, but I am beginning to wonder if the universe is trying to tell me something.

The first was on Bill's site which had a performance of a song 'Teenage Dirtbag'.  The second was a recommendation from Douglas about a documentary film of that title, which is about a legendary American mountain climber, Fred Beckey, who probably has more first ascents than anyone ever.  In the film 'dirtbag' is defined as someone obsessed with mountain climbing.

I am not a mountain climber.  I don't like heights.  But I have often thought that my sailing has more in common with some mountain climbing than it does with most sailing.

After watching the film, which is an hour and a half long and which I recommend, I believe Fred Beckey was a true original.  I observe that we had in common a number of quite attractive women in our lives.  We differ in that he never married one.  His climbing was phenomenal, but it always required at least one climbing partner.  I had the advantage of being able to sail alone.  Like most originals Fred was not easy to get along with.  Modestly I claim to be the easiest possible original to get along with.  Carol might take exception to that, but she doesn't read this journal and so will never know I made that claim.

Some of the film is older footage from when Fred was in his prime, but a lot of it was made when he was no longer and is painful to watch.  The will was still there--at least sometimes--but the body was not.  He died in 2017 at age 94.  I think he lived too long. 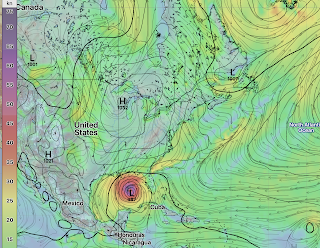 There is an area of low pressure presently just north of Venezuela.  On this mornings' GRIB this is how the European model projects it will develop and where it will be a week from now.  I will be paying attention.