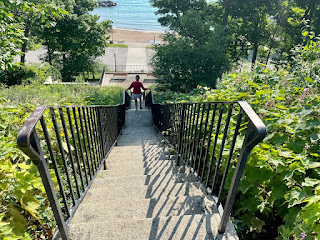 Above are the 120 steps leading down to Lake Forest’s beach.  I counted them.  I did so last summer as well and only came up with 113.  I cannot account for the inconsistency.  We walked down to the beach this morning, a gradual downhill on a street charmingly named Deerpath before reaching the final bluff and the 120 steps and then back up a different street, Westminster, besides the mansions of the very wealthy, many of which are mostly hidden by walls and high hedges. Of those that can be seen many are quite attractive, though far too large for one who can live in small spaces and prefers to.  Just over three miles round trip.

My life here has settled into a routine.  A walk or a bike ride most days.  My workouts, of which I have not missed one for well over a month, reading, watching some sports on television, and of course Bach and a few poems each day.

I have been reading far more than usual.  My average is about a book a week and normally I read more at sea than on land, but a few minutes ago I finished my fifteenth book since July 1.

However that will change because today is the great day that the new English Premier League season begins, earlier than usual because of the long break in November and December for the World Cup being held in Qatar during the winter rather than in the summer as in the past. Considering that everything is air-conditioned there I am uncertain why it matters.  Arsenal versus Crystal Palace kicks off in a half hour.  I won’t be reading this afternoon.

Three poems from an anthology, THE POETRY OF ZEN, which I am enjoying though I am decidedly not a Zen person.

The first two are by Wang Fan-Chih, which autocorrect keeps trying to turn into Wang Fan-Chihuahua.  Sigh.  I have included the second one here before when I came across it in another anthology. 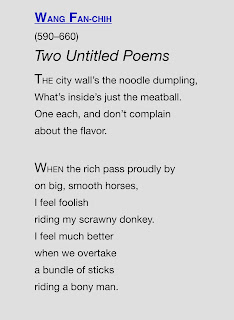 And from Shih Te who wrote in the 8th Century: 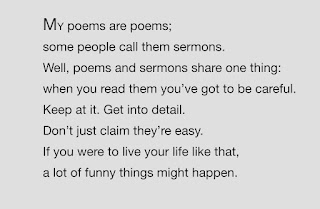