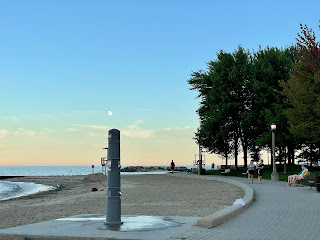 We walked down to the lake after dinner two evenings ago.  I had already had an active day with a bike ride and my weight workout, but Carol had been in the office all day and wanted exercise.

As I have often noted, I lose track of the moon when ashore as I never do when at sea and found as we sat at the bottom of the 120 steps down to the beach an almost full gibbous moon.  I have always liked the odd word ‘gibbous’.  It comes as I have learned from the Latin gibbus, meaning ‘hump’ through the Late Latin, gibbosus, ‘hump-backed’.

The column below the moon is a shower.

I woke at 5 am this morning and rode with the productive members of society into Chicago on commuter trains to keep an appointment with the beautiful skin cancer doctor.  She sliced two bits for biopsy and froze several others.  As always I am slightly smaller than I was before seeing her.  Business as usual.

She does not know that I find her beautiful or that I have made her immortal.

Bookbub recently provided me with THE ROBBER BARONS by Matthew Josephson, originally published in the 1930s and considered a classic, about the creation of great fortunes between the end of the Civil War and 1900.  I found the book interesting and enjoyable.  It filled in some gaps of my understanding of American history.  As I wrote to a friend earlier today I am going to get it all together just before I die.

While there were many fortunes made, Rockefeller, Carnegie, and Morgan rise above the others.  All fortunes came from monopolies.  Good for producers.  Bad for consumers.  The end of that came with the assassination of McKinley and the ascendence to the Presidency of Theodore Roosevelt.

Two quotes from the book.

And in the late 1890s when Mark Hanna, the then head of the Republican Party, wrote to a young prosecuting attorney in Ohio: You have been in politics long enough to know that no man in public office owes the public anything.

It’s good your dermatologist is beautiful. My former dermatologist is an attractive woman also, but she made the national news this week, arrested for poisoning her husband with Drano! This cancels out physical beauty I think. Fortunately I moved away last year.