Evanston: a sunset and some quotes 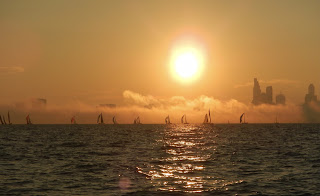 The beautiful sunset comes from the deck of Jay’s Olson 34, SHOE STRING, during last Wednesday night’s race.  Chicago’s skyline from the water is spectacular.  Enough to make one want to have a boat on Lake Michigan.  Oh, that’s right, I’ve done that.  I thank him.
Amidst increasing disruption I am reading MACHINES LIKE ME a novel by Ian McEvan, perhaps best known as the author of ATONEMENT.  It is about a 30ish Englishman who buys one of the first synthetic men, a lifelike robot, and I suspect will turn into a love triangle with the man’s girl friend.  I am not far into it, but have already come across two good lines.
Factory settings—a contemporary synonym for fate.
An old friend—a journalist—once said that paradise on earth was to work all day alone in anticipation of an evening in interesting company.
Of quotes, Geoff in Ireland, wrote about my observations on listening to HUCKLEBERRY FINN that perhaps I had chosen the wrong classic.  He suggests James Joyce’s ULYSSES.  I am going to take him up on that or at least give it a try.  I have never finished the novel, though I have started it twice long ago and recall that it has two great quotes in the first hundred pages.
God is a shout in the street.
History is a nightmare from which I am trying to awake.
Geoff also mentions that Joyce makes reference to forty-six different Dublin pubs, all of which have been closed for the past twelve months.  When they reopen he intends an epic crawl with his adult children to all forty-six in a weekend.  By the end crawl indeed it may be.  I hope for a report.
Also of quotes, Google notifies me that a site of quotes for Oceans Day includes A sailor is an artist whose medium is the wind.  I did not even know that oceans have their own day.
Posted by Webb at 12:24 PM

Thank you for the reports from the middle of our great country. I am enjoying them very much. Chicago is a beautiful city.