Yesterday three short, stocky and very strong men in two hours dismantled, packed and removed our living and dining room furniture, hopefully to be seen again in Hilton Head on the 29th.  Tomorrow other men arrive to remove the rest of our stuff to be moved twenty miles north to Lake Forest.

We have been throwing out stuff for weeks, but we still have too much.  Far too much to my mind, but then I can live on a Moore 24.  Twice in my life I have lost all my possessions.  I know that they are not important and I have no need or desire to hold on to relics of my past.

As some of you know I have a rule for boats that if I can go a year without using something, I can go on not using it and it is gone.  There are a few exceptions on GANNET:  my dry suit; the Jordan drogue; the emergency rudder.  But I think the rule ought to apply to land dwellings as well.  It might even be a good idea to throw out everything every ten years except perhaps major pieces of furniture, taking into the future only what you can fit into a knapsack and start again.  It is liberating.

Among the hundreds of magazines available to me through Apple News Plus is CANADIAN GEOGRAPHIC, the current issue of which has a link to an excellent eight minute film about wolves that live and thrive on an isolated coast in British Columbia.  I enjoyed it very much and hope you will too.

From Sailing Anarchy comes a link to a video about the building of WINDWARD PASSAGE, one of the truly revolutionary boats, a 73’ maxi of her time that was really a big dinghy.  I saw her twice.  When I limped back to San Diego with failed rigging after my second attempt at Cape Horn I tied up to dock at what was then Kettenburg Boat Yard for repairs and was next to WINDWARD PASSAGE.  I recall being impressed when her professional crew of two maneuvered her easily from her slip.  The next time was about a dozen years later when she was sitting on the hard in Sydney, Australia, after having been sold to a suddenly rich man who became as suddenly poor again.  I don’t know what happened to her after that.

Alan Gurney, her designer, is interesting because after a brief and successful career as a yacht designer he quit and returned to his native UK where he wrote books about the Antarctic.  I think he might have lived for a while on Islay, the home of Laphroaig. 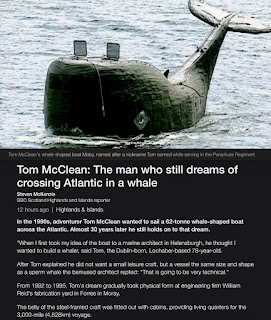 I came across the above this morning on the BBC news site.  Not all ‘dreams’ are worth pursuing; not all edges of human experience equal.

I expect this will be the last entry ever from Evanston.  We have been here fifteen years, during which I have sailed around the world twice.  This is a nice condo.  Evanston a decent place.  I move on without regret.

"It might even be a good idea to throw out everything every ten years except perhaps major pieces of furniture...."

- Including wives? (excluding the wonderful Carol of course!)

About 18 months ago, I saw Windward Passage in a slip in Newport Beach harbor next to the Duffy boat dealer and rental operation on Pacific Coast Highway. She has been more than fully restored and is in shiny, mint condition. All of he deck hardware is mounted on highly varnished teak blocks and all of the stainless steel is polished to a mirror shine. I asked a deck hand who was cleaning the boat how often the owner takes her out and his response was "not often". I thought, what a shame. If you want to see Windward Passage, you can visit the Duffy dealer and ask permission to go down on the rental dock. The boat in on the right hand side as you walk down the ramp to the Duffy rental dock. By the way, renting an electric Duffy boat is a great way to tour the harbor with a silent motor and a top speed of five knots.

When the military moved our family they boxed everything and put an inventory sticker on the side. We moved about every three years and at times had boxes with stickers from previous moves, some things that were not useful enough to have been unboxed during the past 3 years. When a box got 3 stickers we started culling them, so our 9 Year Rule is close to your 10.

Hi, Clark, I conclude a type for my “10t” which was intended to be my ‘!’. Whatever we humans do hang on to stuff beyond use or reason.