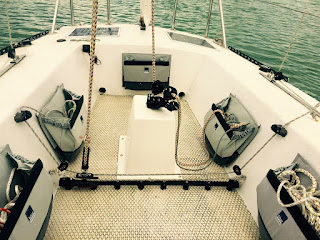 Several days ago yesterday was forecast to the the rainiest of the week, instead it was one of the nicest since I’ve been back, with only one brief light rain shower at 4 p.m. by which time I had completed the mainsheet traveler move to the cockpit sole and was in The Great Cabin pouring a celebratory plastic of red wine.
The last part I had been waiting for, a new Harken traveler car was delivered that morning.  The old car was a windward sheeting car, the most expensive Harken makes for GANNET’s track.  It came with the boat, but I have never liked it.  I can see its advantages when short tacking up the windward leg of a race course, but in sloppy conditions at sea or even with wakes at an anchorage or mooring, the lack of resistance to leeward causes the car to slide back and forth wildly and I installed cleats on the old traveler bridge to tie the control lines down.
The previous day I used a high strength epoxy to glue the pod in place.  Probably this was enough, but I bolted it as well.  Bolts are cheap, and if the pod started to detach from the cockpit sole in the middle of an ocean I would not be happy.
I couldn’t have done the job alone without ViseGrip pliers.  For a while yesterday I was Webb-In-The-Box, popping up in the companionway to tighten bolts, popping down to reset a ViseGrip on the next nut, tying off the handle to the under deck part of the backstay control line to keep it from turning.
Everything went about as expected, except that moving a spring loaded block from the old car to the new one took twenty minutes before I succeeded in compressing the spring in one hand and securing the pin in a shackle with the other.
I had downloaded photos of several Moore 24s that have their travelers on the cockpit sole.  I don’t know the names of the boats, but appreciate the guidance they offered.
Gilles Combrisson made the pod, provided and cut the Harken track and the backing strip of G10 to size, provided bolts, nuts and risers, and told me of the Harken DuoCam which elegantly solves how to run the backstay control.
I have not met Gilles in person, but once while we were speaking on the phone, I said something to the effect that if everything was about right, I would sort it out.  My experience of owning and maintaining boats for a half century in various parts of the world is that ‘about right’ is usually the most you can hope for.  I don’t recall Gilles exact words, but it was clear that ‘about right’ is not good enough for him.  He wants things to be right, perfect if possible.  I admire those who set their own standards, and I thank him for his help.
Disposing of the bridge and moving the traveler has opened the cockpit up nicely and was a very good thing to do.
GANNET is again in sailing condition and I’d like to go.  Light winds and showers are predicted forever.
Posted by Webb at 10:49 PM