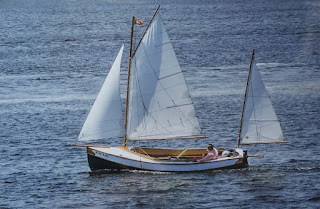 My friend, Tim, runs marathons.  I have written of him here before, most recently when he pulled off the unique double of running a marathon one morning and playing violin in a symphony orchestra concert that evening.  He has now completed his 50th marathon; and I have his permission to report that he is 50 years old.  I have congratulated him and do so again.  He writes that his next goal is 100 marathons, which at an average of five a year—though he ran numbers 49 and 50 just five days apart—he expects to reach his century at age 60.  If I’m still alive and in the U.S. I’ll be waiting at the finish line.

GANNET has not sprouted a second mast.  The photo is of Steve Earley’s SPARTINA and I’m running it just because she is so pretty.  So is Steve, but he blushes when people tell him so.  The photo was taken by a friend of a friend of Steve’s who saw them sailing one day and sent a print to Steve as a thoughtful surprise gift.
Steve and SPARTINA are about to start their annual fall cruise.  You can follow them here.

A lovely sunny day.  The third in a row.  Monday was the first evening I was able to sit on deck and watch the sun set behind the Opua hill, rather than stand in the companionway.  I expect I will be able to sit again this evening, or rather late afternoon as New Zealand has yet to go on summer time and the sun sets early.
Bob, the rigger, arrived as scheduled this morning, swarmed up one of the shortest masts he will ever climb, and installed the TackTick masthead wind unit.  It is working.  The wind is presently 5.3 knots.  Being wireless and solar powered, installation of masthead unit and deck level display is elegantly simple.  I hope it continues to function.
I scrubbed the waterline from the dinghy.  Mike, from Yacht Care, who checks on GANNET in my absence, dives and cleans the bottom every other month.  She needs to be anti-fouled, but I don’t know whether I will do that now or wait until next March.
GANNET is not a boat for cold climates.  Even in our only moderately cool temperatures with lows in the 40sF/6 or 7C, condensation forms over night on the inside of her thin uninsulated hull.  Other than that she has been remarkably dry despite the rain upon my arrival.  The forward hatch is not leaking and only a few drops of water, which enters from the deck opening for the backstay control and who knows where else, has collected in the bilge,
A spider moved aboard in my absence and there is, or was, a spider web in the bilge.  I don’t think it was a good choice.  I did not find the spider.
I still haven’t dug out the Torqeedo.
If the weather holds, and the forecast is that it won’t, I’ll go sailing tomorrow and set the new gennaker for the first time.
Posted by Webb at 2:01 AM