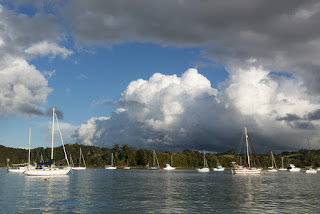 The photo above taken late yesterday afternoon, though I could take another quite similar right now, and this ten day forecast for KeriKeri, the nearest town to Opua for which the NZ Met Service publishes forecasts, show why New Zealand is green, and also one of the reasons my progress in moving the mainsheet traveler is slow.  It is not raining constantly, though this coming Thursday looks to be a complete washout, but there is seldom a dry hour between passing showers, some of them heavy. 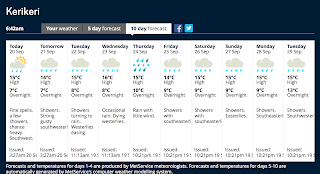 Yesterday I undid many, many difficult to reach nuts on obstinate bolts, above deck and below.  When I thought I had removed them all, the mainsheet traveler bridge remained solidly in place, so I concluded, correctly, that it was epoxied as well as bolted.
I usually wake frequently during the night.  Every time I did so last night my mind resumed considering alternate plans for removing the bridge.  Plan one was not subtle.  I would try with a hammer and chisel, if I had one on GANNET—I don’t and used a big screw driver instead—to separate the main part of the bridge from wood supports to which it had been bolted and which themselves had been bolted through the sides of the cockpit.  If that didn’t work, there was going to be a lot of slow and unpleasant hand sawing.  Fortunately, it did.  Whacking things with a hammer is not often good advice, but sometimes it works, particularly if you don’t need to preserve what you are whacking, and generally it is satisfying.
With the ends loose, I still had the center support tube which passed through the cockpit sole to disengage.  In it I found four small screws that I had overlooked yesterday and a plastic collar that gave way to a Dremel tool whose cord just barely reached.  A fitting riveted below deck proved unremovable, but finally I was able to push the tube down into the cabin rather than pull it up into the cockpit.
Then the rains came and I quickly taped over now empty bolt holes and the pipe hole. 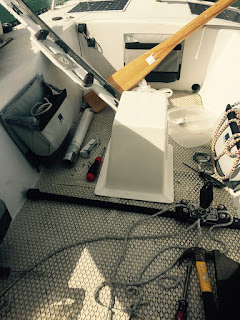 In this photo the removed bridge is at an angle, the center tube and one of the side support blocks beneath it.
Below is the cockpit after clean up.  The traveler and pod are not yet fixed in place.  The adhesive I need for the pod is due next week; and I want to think a bit before drilling holes in the cockpit sole. 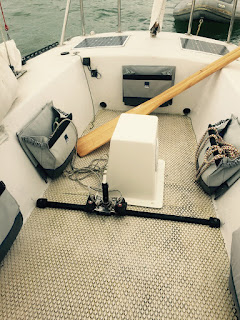 At the moment it is raining and I’m through for the day.
Posted by Webb at 12:14 AM