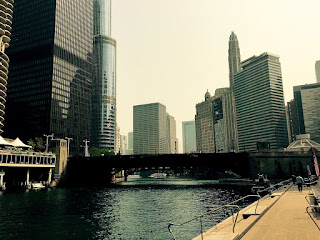 Cities are usually founded on water: harbors, rivers.  Once they reach critical mass they continue to survive long after the initial reason for their being has become irrelevant.  None more so than Chicago which was settled because of an eight mile/thirteen kilometer portage between the Chicago and Des Plaines rivers linking the Great Lakes to the Mississippi/Missouri/Ohio River system that touches two/thirds of this country.
Chicago is not a natural harbor.  Multiple breakwaters have been built to provide some protection.  It is difficult now to imagine Chicago as a significant port; but one hundred years ago the scene in the above photo would have been filled with ships.
Carol took last Monday off work and we rode the train into the city and then, after a very short water taxi ride, walked a mile or so along the developing river walk which can be seen in the lower right as far as the lock to Lake Michigan, before retracing our steps to one of many outdoor restaurants along the river for lunch.  Chicago has great public spaces and continues to create new ones.
In addition to water taxis, tour boats and rental kayaks ply the water in summer.  The river looks clean, but is not safe to swim in.  Perhaps some day.
It was good to be on the water, however briefly.  And even better to know that I’ll soon be on the water for much longer.

One evening last week I checked COYOTE’s tracking page and found the Medalist 32 a few miles off Bundaberg, Australia, heading slowly northeast.  I concluded correctly that Dan and Ashley were waiting for dawn to enter port and complete their crossing of the Pacific Ocean.
Dan has posted a well written and well thought out piece about the past twelve months in which they transitioned from their very first night sail to successfully crossing the biggest ocean in the world in a small boat.  I have already congratulated them and do so again.
If you read the piece you will discover that I am mentioned.  I trust you know that I have not provided the link because of this.  This is about Dan and Ashley.
———

I thank Shane for a link to a circumnavigation of Ireland in a Drascombe Lugger by two young men, though I am skeptical of thirty foot waves in Force 6.  Well done.

The next entry should come from aboard GANNET.  I fly Tuesday.  Lose Wednesday to the Dateline.  And arrive Thursday, probably in rain.
Posted by Webb at 11:29 AM