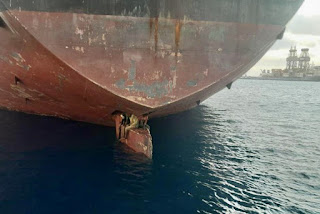 There are so many disparate thoughts that I don’t know where to begin.

I have learned that when overwhelmed, which I am not now but have sometimes been, just start anywhere.  Take one problem, solve it.  Solve another and another and a pattern will form.  So, I quote something I have posted here before:

No one can judge a marriage from the outside.

We all do.  Societies.  Courts.  The intrusive ‘Media.’

We judge the marriages of our friends.  Our neighbors.  Co-workers.  Casual acquaintances.  Celebrities we don’t even know.  And we are always wrong.

Even when we’re right, we’re wrong, because our opinions are based on inadequate information.  Marriages are too complicated and too subtle.  They turn over the years on words said and unsaid, tones, pauses, touches gentle or rough, welcomed or shunned, sex or lack of it, money or lack of it, gestures, expressions, a face turned toward or away.  Thousands and thousands of bonding or eroding moments.

This is not about my present marriage, but about all close relationships and the difficulty, perhaps impossibility, of complete communication.

There are questions we cannot ask of those we are close to and expect an honest answer.  The answer to such questions will always be compromised by what the responder believes is in the best interests of the relationship, or perhaps themselves.  Thus, as I have observed, we have the odd situation in that we are herd animals, yet inside we know we all are alone.

Consistent with this, you cannot know a writer if you do not read his words.

Moving on, I have said that I was formed by the legends of the American West and the myths of Ancient Greece.

On the remote chance you have viewed my YouTube video Beginnings 1, watch you will know that to my surprise from the bedroom in which I spent much of my childhood dreaming of ‘greatness’, I was looking north.  I thought west.  My mind certainly went west.

Just now that west is being portrayed, accurately or not, with frequency on television.  And it is not the West I saw in my childhood mind.

Back then I knew a poem, perhaps doggrel, but one of the few that has stuck in my mind.

Bring me men to match my mountains.

Bring me men to match my plains.

Men with empires in their purpose.

Men with new eras in their brains.

I have googled and learned that the poet was Sam Walter Foss, and that those words were inscribed on a granite wall at the US Air Force Academy to inspire cadets and officers, but were removed in 2003.  Curious and revealing.

I did seek to match the mountain equivalent:  the ocean; and I believe I have.

I did not seek to do any of the others.  But as I have dared to say, at least I dreamed big.

This is mostly, but not completely a disjunct.

Perhaps you have already seen the top photo elsewhere.

Three men living on top of a ship’s rudder for eleven days and 2500 miles from Nigeria to the Canary Islands.

I am impressed by what these men endured and survived. 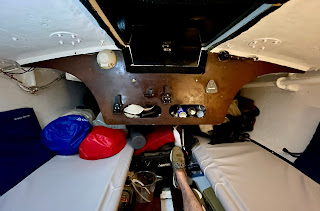 This is not a great photo, but it is what I saw three nights ago when I slept on GANNET.  Title it ‘Cave with Leg’.

We are all Africans.  Fifty or sixty thousand years ago some of our species walked out of Africa.  My ancestors turned left into what is now Europe, where those with less melanin in their skin thrived because they could absorb more vitamin D from the weaker sun.  This ended up giving us not white skin, but as Evelyn Waugh observed ‘pinko-gray’.

Others turned right and walked to what is now China.

How odd that I feel an affinity with some of those who lived there more than a thousand years ago, mostly alone in caves and huts in mountains and forests.

At dawn, even a pure recluse must yearn;

So wrote Liu Tsung-yuan fourteen hundred years ago and he speaks clearly to me, who is a monk, though a much married one.

I admire that Han Shan/Cold Mountain wrote his poems on rocks and trees, and that they have survived a thousand years.

So this is my cave.

I can and have lived as simply as those Chinese recluse poets.

I have written that a 35’ boat, plus or minus a few feet, is the right size for one or two people.

Today the average cruising boat is at least ten feet longer and likely a miserably sailing catamaran which is really a power boat/mobile home with masts.

I have written that if something will not fit on a 35’ boat I don’t need to own it.

I have twice in my life lost every physical possession I owned.

The first time was gradual when sailing CHIDIOCK TICHBORNE.  When I was forced to fly from Saudi Arabia in 1982, I did not own a thing other than the clothes I was wearing that I owned when I  began the voyage in San Diego four years earlier.

When I stepped ashore after sinking RESURGAM in 1992 I again owned nothing but the clothes I wore.

When nine months later I left Key West driving a rental car north to try to resurrect my life, all my possessions fit in one duffle bag.

Now I half own a great many things in this condominium that would not fit on a thirty-five foot boat, much less GANNET.

But what you see in that photo is my space.  My cave.  My Chinese mountain hut.

Were I living by myself, I would now say I do not need to own anything that will not fit inside GANNET.  I could do that easily and live I like to believe with grace.

I am one with few, but I am one with Han Shan.  And I am certain had he seen GANNET, he would have understood instantly.