Hilton Head Island: the married monk; some poems; one child, one vote

I live mostly alone.  Most days I speak to no one beyond saying 'Good morning' to those I pass on bicycle paths or marina docks.  That is different now that Carol is here.  She flew in last Friday and will spend ten days over the Thanksgiving holiday and will be back for almost three weeks over Christmas.  I will return with her to Illinois in January for about a month.  So I am now often having conversations.  How odd.  But daily I read the poems of ancient Chinese and Japanese, often monks.  They sought the monasteries of the land.  I, a much married monk, found the monastery of the sea.  I miss it.  I must enter it again, which I am finding unexpectedly difficult.

My poetry reading these days is Walt Whitman's LEAVES OF GRASS and MOUNTAIN HOME:  THE WILDERNESS POETRY OF ANCIENT CHINA.

I have read Whitman on and off for decades.  I am still not certain what I think of him.  Certainly he is original, but I don't share many of his beliefs or desires.   I am completely at home with the  ancient Chinese, one of whom, Han Shan, took the name Cold Mountain on which he lived alone writing poems on rocks and trees, which were admired by the local prefect who collected and preserved them.

Here are four poems from the book. 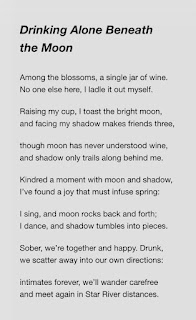 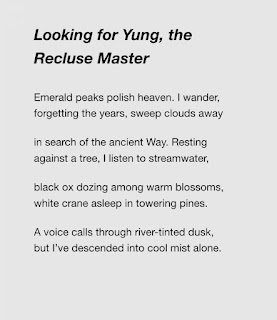 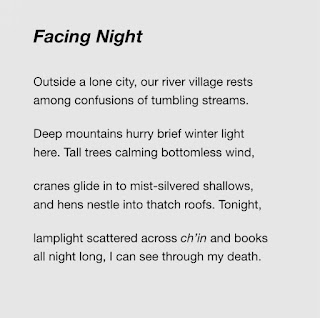 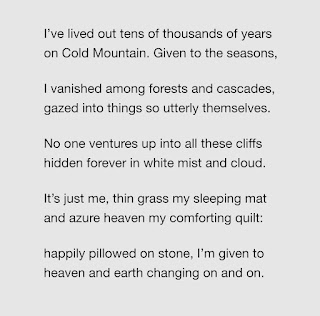 From Larry comes a quote about democracy with which I was familiar and believe I have published here before.  I thank him for reminding me of it.
The best argument against democracy is a five minute conversation with the average voter.
--Winston  Churchill
If you have been reading this journal for a while you know my thoughts on democracy.  I repeat the link for those who may have forgotten.
2_Evanston__three_hypotheses.html
There is an interesting test of democracy presently underway in our neighboring state of Georgia where a violent, unstable former football player is running for the Senate based on no qualifications other than he was once an excellent football player.  So was O.J. Simpson and we know how that turned out.
Also interesting is that I have read of a court decision in New Zealand which may lower the voting age from eighteen to sixteen.  What a splendid idea.  I have always had the greatest admiration for the sound judgement and wisdom of children.  I expect that my Kiwi friends can look forward to Taylor Swift being their next Prime Minister.
As you would expect I have been watching the World Cup which is my favorite of all sporting events.  I have no original thoughts about it.  I missed the startling Saudi Arabia upset of Argentina because the match started at 5 AM my time.  I did see the highlights and have all the matches being recorded on YouTubeTV.
Tomorrow Carol will prepare the traditional Thanksgiving turkey dinner.  I am very much looking forward to that.
I wish my fellow Americans a happy holiday, and the rest of you a fine day wherever you are.
Posted by Webb at 12:34 PM